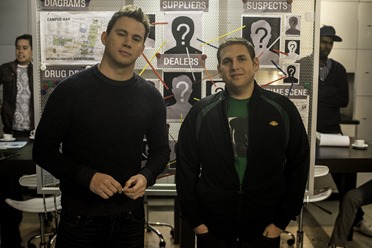 21 Jump Street was an unexpected delight because it mocked every possible aspect of turning an ‘80s cop show into a movie. 22 Jump Street aims to do the same thing for sequels. It’s too bad that when it isn’t being meta, it loses steam – but it’s still a better than average sequel.

22 Jump Street opens with Jenko (Channing Tatum) and Schmidt (Jonah Hill) messing up a big drug bust in an undercover sting turned bad, leading to an action sequence involving an eighteen-wheeler. When their superiors decide the op went wrong because they didn’t do exactly what they did last time the pair is returned to what they do best – going undercover in school – in this case, college.

Their new base of operations is 22 Jump Street, a Vietnamese church across the street from the Korean church they used last time – because someone bought it. The new base is opulent – they’ve been given twice the budget in hopes it will double their profits.

The revelation of Captain Dickson’s (Ice Cube) new office leads to a double whammy of a truly, epically bad pun and sets up to manage our expectations covering the idea that sequels are always worse than their originals – a concept voiced in the recent Muppets movie, though less colorfully.

Schmidt and Jenko find themselves at MCU and, to Schmidt’s horror, splitting up to investigate two different campus scenes. In a mirror of the first film, Schmidt is less popular, while Jenko finds a simpatico buddy in Zook (Wyatt Russell), the quarterback of the school’s football team, and flourishes.

Meanwhile, Schmidt does succeed in winning a bit of interest from art major Maya (Amber Stevens) – much to the distaste of her roommate, Mercedes (Jillian Bell), an acerbic young woman to say the least. 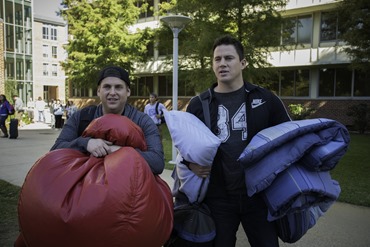 For the first half-hour, as Jenko and Schmidt – and the film – work the meta, knowing sequel, idea, 22 Jump Street is hilarious. When it departs (slightly) from that, it gets too talky and loses momentum – the whole conversation about the pair’s differing paths would be funny in a different movie (as would later conversations between Jenko and a thug, and Schmidt with the film’s villain), but here they just slow things down. I’m guessing that this was a result of the operation running out of money (that office and that opening sequence? Very, VERY expensive), but it never quite jells.

Unexpected connections arise that, within the idea of a sequel, make perfect sense and get some big laughs (Maya’s parents, for example – and the connection between Ghost (Peter Stormare), the escaped drug dealer from the opening sequence, and the movie’s big finish).

Naturally, being a sequel set in college, there is a Spring Break section. It arrives just as the more unsuccessful bits of the movie are reaching the audience’s limit – so, good timing there – and gives us a big finish that gets everything right (right down to the gunshot wound that doesn’t affect the wounded guy until the action’s over). There’s even a classic bit of fight choreography that recalls Jackie Chan, with Jenko using whatever’s handy in a fight against two thugs.

There are also enough big laughs between dead spots to keep the movie from being a failure. Stay through the end credits – they are even cleverer than the movie’s first half hour (and that’s pretty clever).

22 Jump Street is definitely a nice change of pace from the summer’s onslaught of big(ger) budget blockbusters – both Hill and Tatum continue to be extremely impressive as a team – and on the Big Drink Scale, I had about enough left to get to the bottom of the escalator on the way out of the theater.