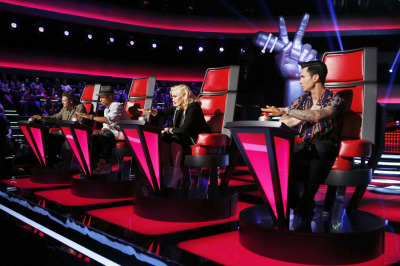 “The Voice 360: Be the Coach” Uses Oculus Rift Technology to Allow Fans to Judge a Blind Audition

Fans will get to sit in the famous coaches’ chair and via Oculus Rift virtual-reality — a complete 360° immersion — will allow them to physically and virtually experience an entire “blind audition.” Fans will sit next to and interact with new season seven coaches Gwen Stefani and Pharrell Williams, as well as returning coaches Adam Levine and Blake Shelton.

With the public encouraged to participate, “The Voice 360” will tour the nation with four real-life coaches’ chairs starting in New York on Tuesday, Sept. 9, and will end in Los Angeles on Monday, Sept. 22, the day the new season of “The Voice” premieres.

In “The Voice 360,” a high-impact, real-world stage is the doorway into virtual reality. While seated in an actual coaches’ chair, the Oculus Rift virtual-reality headset takes fans on a four-minute journey inside “The Voice” studio in live-action, 3D imagery. Oculus Rift allows fans to physically motion their heads up, down and side to side to see the entirety of the studio and reach out to the coaches sitting virtually next to them. During the audition, the chair will actually turn 180 degrees, revealing the performer. The experience concludes with audition comments from each coach and the musician choosing his mentor.

The traveling coaches’ chair began touring in 2012 to promote the second season of “The Voice” and gave fans a chance to sit in the chairs made famous by the show’s success. With the new season approaching, NBC’s use of cutting-edge technology with A-list celebrity talent in “The Voice 360: Be the Coach” gives fans an entirely new and intimate way to experience “The Voice.”

The tour dates for “The Voice 360: Be the Coach” are as follows:

1271 Avenue of the Americas – Plaza across from Radio City Music Hall:11am – 7pm

“The Voice” returns with the strongest vocalists from across the country invited to compete in the blockbuster vocal competition show’s seventh season. Celebrity musicians and coaches Adam Levine and Blake Shelton return with new judges Gwen Stefani and Pharrell Williams, while Carson Daly continues to serve as host.

For more information about “The Voice,” visit http://www.nbc.com/the-voice. The official hashtag for this promotion is #TheVoice360.

Photo by Trae Patton/Courtesy of NBC