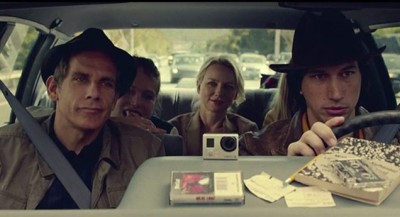 While We’re Young may not be Noah Baumbach’s best film (I can’t quite decide between Margot at the Wedding, Frances Ha and The Squid and the Whale), but it is certainly his most enjoyable – and commercially viable.

Josh (Ben Stiller) and Cornelia (Naomie Watts) are a happily married couple who have a nice place and good friends who, having just had one themselves, insist that they should have a baby.

Josh is a documentary filmmaker (who’s been working on his next film for eight years) and university lecturer and Cornelia is a producer (though not of Josh’s work) and they are, apparently quite content – though there’s an underlying anxiousness to them that comes with middle-age and wondering if they’ve really achieved anything.

When Jamie (Adam Driver) and Darby (Amanda Seyfried) sit in on one of his classes, their carefree lifestyle winds up drawing the older couple into their orbit. Josh and Cornelia start emulating the the younger couple – Josh buys a stylish fedora; Cornelia gets into hip hop dancing…

Complications arise that involve Cornelia’s father, legendary documentary maker Leslie Breitbart (Charles Grodin) and, after two acts that are as engaging and funny as anything by the vintage Woody Allen (and as insightful), things take a one hundred and eighty degree turn.

While We’re Young is, essentially, a coming of age story – though it’s Josh and Cornelia who have to realize their situation and accept that, while they are no longer young, they still have a lot of their own lives to live and they must chose to grow up and accept it.

Baumbach writes from a place pretty much adjacent to Josh and Cornelia so, as a result, when they come to that point of realization, he never makes them look too foolish. That keeps them relatable to the audience – especially when we learn more about Jamie and Darby.

Josh may be Stiller’s finest performance. He makes Josh’s arc completely believable – from his anxious humor to his righteous rage; from his ultimate deflation to his genuine growth. Watts mirrors Stiller with her portrayal of Cornelia (though she has less distance to travel, growth-wise).

Driver manages to keep Jamie from being either too likable or too much of a douche. Jamie lives in the moment and his spontaneity is oddly charming – until it isn’t. Meanwhile, Seyfried may have just turned in her best work as Darby. As the film progresses, we see her reveal unexpected layers. Darby may be the most sympathetic character in the film by the time the credits roll.

Even when the film changes tone, it never feels like it’s two different movies – the comedy turns to drama in such a way that it’s seamless and its deliberateness never jars. The final sequence shows Josh and Cornelia’s growth in a warm, witty way that’s not that far from where they thought they were at the beginning.