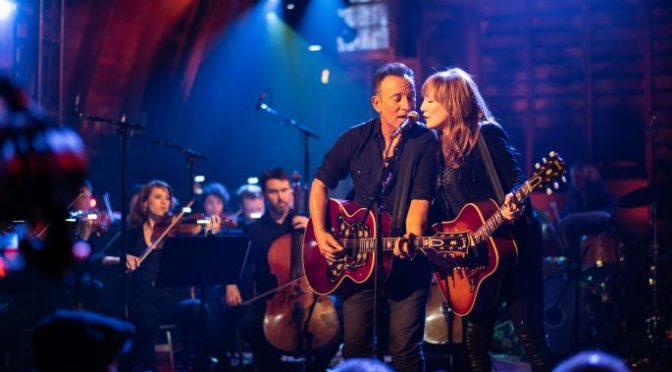 When he released his Western Stars album, Bruce Springsteen decided not to tour in support of it. Instead, he made a film that’s part performance, part documentary and part something else.

It is as unique a film as I’ve ever seen – and a joyful experience as Springsteen latest meditation on his life and America unfolds before us.

Written, produced and co-directed (with Thom Zimny) – and with all but one song written and co-arranged by The Boss (he roughed out the orchestral arrangements, playing all the instruments on the demos) – Western Stars is a genuinely unique experience.

Instead of touring, Springsteen set up the 180-year old barn on his Colts Neck, New Jersey property for a one-night concert for a select group of friends and associates – and that barn has great acoustics (you need to see Western Stars in a theater with an ATMOS sound system – it’s quite amazing!).

For this special occasion, Springsteen eschewed the standard intros (‘This next song is about…’) for a series of two-and-three-minute mini-movies over which he talks about the songs, his life, metaphors and so forth.

The honesty he brings to the table is sometimes startling – as when he admits that, for a long time, he believed that if you loved someone, you had to hurt them; or his seeming bafflement when he notes that ‘nineteen albums later and I’m still writing about cars’ (even when he delves into a possible answer to why this is so, he still seems a bit baffled and, perhaps, a bit bemused).

As for the songs themselves, they are, mostly, beauties – and not all of them are exactly as he recorded them.

On Stones, for example, his wife, legendary session singer/songwriter Patty Scialfi (Google her, please) joins him and, in an accompanying 10-minute making of film, he finds himself thinking that he should have done that on the album (again, his honesty is something to behold).

As he, his band and a thirty-piece orchestra played his songs in beautiful old barn, I got the sense that some of his biggest influences (Bob Dylan aside), had to be The Sir Douglas Quintet and, of all people, Jimmy Webb (see: his sincerely cover of Rhinestone Cowboy in what would have been the encore slot in a regular concert).

At 70, The Boss could be doing a Las Vegas Revue – playing his hits for an astronomical fee and taking things easy.

Instead he’s edging his material into uncharted waters and coming up with unique ways to express himself as an author, playwright, singer/songwriter and, now, filmmaker.

Although I’m not the biggest Springsteen fan – more of and admirer than a fan, actually – I found Western Stars to be a once in a lifetime kind of experience (and again, see it in a theater with an ATMOS sound system!).

I know, it’s a film. I can see it as many times as I want – and get the Blu-ray when it comes out.

I have no doubt that Western Stars will hold up repeated screenings, but that first time you see it. Oh, man!