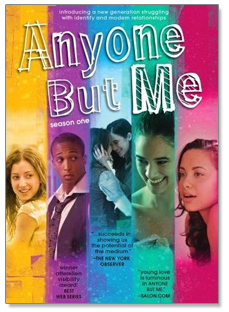 You may ask, “Tiffany, what happens at a Web-a-Thon?” well I’ll tell ya folks! At the ABM Web-a-Thon you’re gonna get guest appearances by the cast, new videos, a walking tour and interviews from your favorite ABM actors. But if all of that wasn’t enough, the folks at ABM are also giving back to the LGBT youth community by donating a portion of the proceeds to The Ali Forney Center, the largest agency dedicated to providing housing and services to homeless LGBT youth in NYC.

It’s a three part pre-taped show hosted by entertainment reporter Lisa Bernhard. The show starts at 4:00 PM EST Tuesday, July 27th through Thursday, July 29th on AnyoneButMeSeries.com, YouTube, Hulu and Blip.tv. You can make a donation via Paypal at the AnyoneButMeSeries.com site and auction items will also be available to bid on through the “Anyone But Me” ebay store starting Monday, July 26th.

In my opinion, this Web-a-Thon is really about connecting with the viewers and letting the fans contribute to the show they love. The ultimate goal is to raise between $100,000 to $120,000. Let’s help keep Anyone But Me out there for everyone to continue enjoying or to discover for the first time. It’s a project like this that makes a difference in someone’s life by making their voice heard and life represented.

To participate in the “Anyone But Me” Web-a-Thon, visit AnyoneButMeSeries.com.