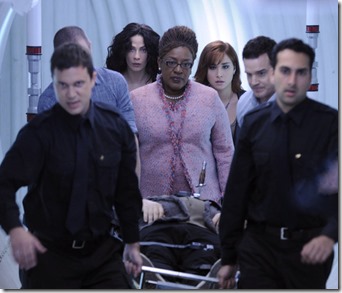 In tonight’s season premiere of Warehouse 13 (Syfy, Mondays, 10/9C), Secret Service Agents Pete Lattimer and Mika Bering have to save the world and deal with an immortal while Claudia Donovan and Steve Jinks have to enter Artie’s mind to persuade him to live. For the Warehouse 13 team it’s just another day at the office.

In the winter finale, We All Fall down, Warehouse 13 Supervisor Artie Nielsen (Saul Rubinek), under the influence of an Artifact, found and released the destructive power of the Black Orchid – causing a ‘Sweating Sickness’ on the world. Unless stopped, it would create a pandemic that would make the Black Plague look like the sniffles. Deaths would begin in twenty-four hours.

In the spring premiere, The Living and the Dead, Pete (Eddie McClintock) and Myka (Joanne Kelly) approach a surprisingly unsober, ever so slightly lecherous university professor (James Marsters) who may lead them to an Artifact that brings flowers back to life (the Black Orchid had disintegrated upon contact with air but Pete and Myka had kept the planet’s ashes). This in turn leads them to the catacombs of Paris – and a staggering revelation about the professor.

While Pete and Myka try to save the world, Claudia and Steve Jinks (Aaron Ashmore) are trying to bring Artie out of his catatonic state – by getting into his mind (which has a very familiar landscape). 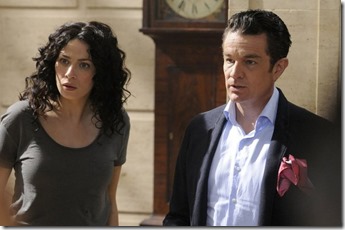 While everyone – including guest cast members (Kate Mulgrew, Lindsay Wagner, Roger Rees, Genelle Williams and CCH Pounder – gives terrific performances, Rubinek really shines as Artie tries to not deal with what he’s done – not the Sweating Sickness, so much as killing Leena. His reaction to Claudia and Steve’s efforts to persuade him to live – as the world may be dying – is truly heartrending.

For an episode dealing with the possible end of the world – and an especially horrible one, by a nasty disease – The Living and the Dead isn’t nearly as dark as it might have been. That there’s a lot of humor is one of the hallmarks of Warehouse 13 – which the cast and crew refer to as a ‘thrilleromedy’ – and writer Drew Z. Greenberg definitely gets the humor/drama mix, Warehouse 13-style, just right.

Given Greenberg’s crackerjack script, director Millicent Shelton gives the ep a muscular pace, making the show’s trademark tonal shifts from comedy to drama (or vice-versa) on the proverbial dime seem effortless. I would think it to be the season’s best ep if I hadn’t seen next week’s ep, which is just as good. As it is, The Living and the Dead is lots of fun and gets season four’s final four-ep run off to a sterling start.