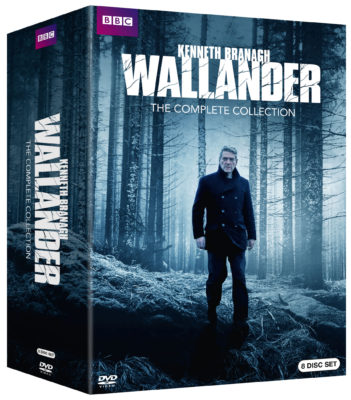 The Wallander novels of Henning Mankell are the basis for the fine British crime series Wallander. The four series (seasons) of the show contain fifteen ninety-minute episodes – nine adaptations of one of the nine novels – that follow Wallander through seven years of his life.

The stark, serene and occasionally eerie landscapes of Sweden (the series was shot in and around the city of Ystad – where the novels are set) are used as both connective tissue (Wallander drives some distances between work, home and visiting his daughter) and as an emotional undercurrent (ranging from mysterious to unexpected comic relief) to the various mysteries and character arcs of the show.

Kurt Wallander (Kenneth Branagh) is a detective inspector with the Ystad Police. When we meet him, he’s just discovered that his soon-to-be-ex) wife, Inga (Phyllis Logan) is seeing someone and it’s serious. He has a decent if not effusively good relationship with his daughter, Linda (Jeany Spark, Da Vinci’s Demons) and a not-quite-combative one with his father, artist Povel Wallander (David Warner), who’s more and more showing symptoms of Alzheimer’s.

From the opening moments of the first episode – a terrified girl running through a field of rape and immolating herself when Wallander identifies himself as police – through to the final moments of the final episode – Wallander is a mystery series that follows the most often morose detective through personal and professional minefields that firmly place him in the camp of police detectives who cannot leave their jobs at the station at the end of shift – and whose shifts tend to be until a case is solved or officially shelved.

For the first two series, Wallander works with a partner, Detective Sergeant Anne-Brit Hogland (Sarah Smart, The Secret of Crickley Hall), a brighter light who counterbalances her dour partner well.

Detective Magnus Martinsson (Tom Hiddleston, Thor, The Avengers) is a junior detective who works tech and has a tendency to make assumptions – which usually earns a cautionary look or remark from Wallander.

They all work for Lisa Holgersson (Sadie Shimmin, Coronation Street, Mr. Selfridge), a good boss whose sterner moments are usually caused by situations that seem to be getting out of hand.

The mysteries Wallander has to solve (what could make a girl so scared of the police that she’s set herself on fire; who would go to the trouble of burying the remains of a murdered girl on Wallander’s newly acquired property; why has Linda’s father-in-law suddenly just disappeared) are a mix of the usual motivations (to prevent certain knowledge from coming out; revenge for abused women) and the not so ordinary (to prevent an assassination, or cause financial chaos, for example).

While the mysteries hold our attention, Wallander’s arc throughout the series is equally as compelling. His relationship with Linda founders (she marries impulsively and he wasn’t even invited to the wedding) even as his relationship with Povel strengthens; his attempts to seek new relationships take odd turns (one has ulterior motives; another can’t handle his being unable to leave his job at the station at the end of shift), with the oddest one with a concert pianist, seems like it might be the one to stick.

Watching Branagh and Warner in their father/son scenes is as powerful as anything you’re likely to ever see in a TV series (cable or network) and watching Wallander and his daughter get past their problems and be in each other’s lives again feels completely genuine.

When Wallander takes his father’s final bit of advice (‘get someone one to sit with’), the someone is a dog called Jussi – a smelly Black Lab that seems to love everyone.

Wallander, himself, rarely rises above being morose, but when he does – with his granddaughter Klara (Kitty Peterkin), for example, it’s like watching the sun come out. Another thing about Wallander is that, despite being morose a good bit of the time, he’s never world weary – every time he and his colleagues encounter some new atrocity, they are hurt by it. There is a cost – especially for him. That’s why he can’t leave his job at the station when he heads home – he is just so empathetic and caring.

One final thing about the character – he’s diabetic. Given his job, his lifestyle and his choices, that makes perfect sense – and makes him even more relatable as a character. People get diabetes; Wallander gets diabetes. Therefore, Wallander is a real, relatable human character.

During the second and third series, though, things take a bit of a turn for Wallander: he has moments where he seems a bit off, just for a second or two, most of which are followed by moments of brilliance – as when he spots a pay phone in a key spot on a ferry in the 3rd Series premiere, An Event in Autumn – or place him in awkward, potentially dangerous spots – as in his South Africa adventure, The White Lioness.

By the final episode of the show, The Troubled Man, Wallander has been suspended when Linda asks him to look into the disappearance of her father-in-law, Hakan Von Enke (Terence Hardiman, Cadfael, Doctors). It’s a case that could literally do damage to national security – and murder does indeed ensue.

Then there’s the bigger themes – Henning Mansell’s novels explore themes like xenophobia (The Faceless Killer, the first novel and the first episode of the show), for example. To go into the political and humanist themes that bubble throughout the books and the show would take considerably more time and space than I have for a review, but the TV episodes shy away from none of them – and explore them well.

Over four series and fifteen feature-length episodes, Wallander maintains a high level of quality. Even the show’s least successful episodes (The White Lioness) are grade A work. This is a Sherlock-level achievement.