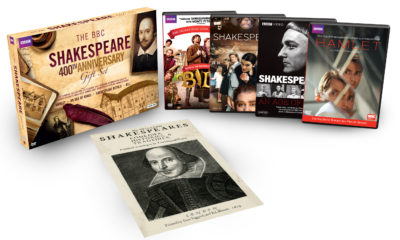 The collection includes: Bill (Shakespeare’s lost years as a lute player – think Pythonesque farce), Hamlet (the Royal Shakespeare Company TV film starring Patrick Stewart and David Tennant), Shakespeare ReTold (exactly what it says on the tin), and An Age of Kings (a 15-part BBC mini-series based on Shakespeare’s history plays).

Bill Shakespeare (Matthew Baynton, the criminally underseen You, Me and the Apocalypse) loses his gig as a member of a lute quartet and leaves his wife and children in Stratford-Upon-Avon to become a playwright in London. Unfortunately, though tutored in writing by Christopher Marlow, he accidentally becomes in a plot by King Philip II of Spain to assassinate Queen Elizabeth I.

A sporadically funny Pythonesque farce with a number of players taking on multiple roles. Baynton stands out. Bill is about half as funny as Monty Python and the Holy Grail, so definitely good enough for a quiet evening.

Bonus Features include: The Making of Bill; A Day in the Life with Matthew Baynton; Bringing Tudor London to the Dales; There’s Something About Shakespeare.

The longest of Shakespeare’s plays, it would go four and a half hours if performed in its entirety (and that’s without an intermission). This version – directed by RCS director Gregory Doran and starring David Tennant and Patrick Stewart) runs 182 minutes.

Being made for television has allowed the production certain luxuries and benefits – like the scene where Hamlet confronts his mother in her closet (think bed chamber), in which we see the scene from both points of view: from Hamlet’s POV, we see his father’s ghost; from hers we see thin air.

The production design suggests an oppressive state with surveillance cameras everywhere – and occasionally we see bits of scenes through these cameras. In a play in which everyone seems to be spying on everyone else, this adds another layer of paranoia to the proceedings.

Stewart’s Claudius is remarkable for his seeming normalcy. The audience can even empathize with him until well into the play when his true evil bubbles to the surface. It’s a bravura performance quite unlike any other version I’ve seen.

Tennant (who was part of the RCS before he became a star via Doctor Who) plays Hamlet so precisely that it’s hard to tell if the character has gone mad with grief or is playing the court (and the audience) in his quest for vengeance. He plays some scenes with a ferocity that rival’s Mel Gibson’s version and others that feel like they wouldn’t be out of place in one of the best Jim Carrey improvisational movies.

The settings for each adaptation are intriguing: Much Ado About Nothing finds Beatrice and Benedick as co-anchors on a nightly news program; Macbeth has Joe Macbeth as head chef at a 3 Michelin star restaurant owned by Duncan, with his wife as maître de and the witches transformed into three garbage collectors; and A Midsummer Night’s Dream set in a cheesy theme park that has a curious interface with ole world magic.

The three are all very, very good, but The Taming of the Shrew is perhaps the one that equals the Bard’s original in both its attention to the plot and the way it subverts the norm.

Shirley Henderson is Katherine Minola – a volatile conservative politician who makes an angry pitbull look like a purring kitty cat on her best day (which she isn’t having when we meet her – insert honey badger don’t meme here).

Meanwhile, her supermodel sister, Bianca (Murray) is picking up Lucentio (Santiago Cabrera) an Italian youth, and firing her manager, Harry (Tompkinson) – dismissing his entreaties of marriage with, ‘I’ll get married when my sister gets married.’

Enter Petruchio (Sewell), a rather dissolute aristocrat who needs to marry a rich woman – and a friend of Harry’s. Cue the fireworks. Cue the wedding – with a stunning revelation on Petruchio’s part. Cue nuclear fireworks and the most peculiar honey moon ever.

Even Kate’s speech about wives being subservient to husbands rings true here – because one little sentence at the end totally subverts the entire thing.

Bonus features include a three-to-five minute interview segment for each tale – one of which is only peripherally about the adaptation in question. It would have been better to omit these entirely.

Grade: Much Ado About Nothing – A-

Grade: The Taming of the Shrew – A+

Grade: A Midsummer Night’s Dream – A-

Shakespeare’s An Age of Kings

This fifteen-hour miniseries based on Shakespeare’s ‘history plays’  has a mind-boggling cast that includes the likes of Sean Connery, Judi Dench, Julian Glover and more.

I had the pleasure of watching An Age of Kings back in the sixties (thank you, Canadian Broadcasting Corporation!) (and, yes, I was a weird kid…) and have to say that it is as good as I remember it (or it could be the lack of sleep…).

Let’s just say that – ignoring the primitive TV production values – An age of Kings proves that Sean Connery was, at his peak, a world class actor; Judi Dench was almost as mesmerizing as a young woman as she is now and that Julian Glover was never better than when he was playing Shakespeare.

Shakespeare’s An Age of Kings is a bare bones set that really doesn’t need bonus features. It’s a small work of art just as it is.

Grade: Shakespeare’s An Age of Kings – A