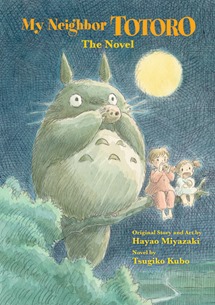 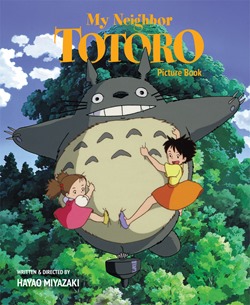 Commemorate The 25th Anniversary Of Hayao Miyazaki’s Landmark Film With MY NEIGHBOR TOTORO: THE NOVEL And An Updated Edition Of The Official Film Picture Book Featuring A Special New Cover Design

San Francisco, CA, September 25, 2013 – VIZ Media, LLC (VIZ Media), the largest distributor and licensor of anime and manga in North America, marks the 25th Anniversary of famed director Hayao Miyazaki’s whimsical animated family fantasy, MY NEIGHBOR TOTORO, with the release on October 1st of MY NEIGHBOR TOTORO: THE NOVEL and a brand new edition of the MY NEIGHBOR TOTORO Picture Book.

In Hayao Miyazaki’s charming animated classic, eleven-year-old Satsuki and her sassy little sister Mei have moved to the country to be closer to their ailing mother. While their father is working, the girls explore their sprawling old house and the forest and fields that surround it. Soon, Satsuki and Mei discover Totoro, a magical forest spirit who takes them on fantastic adventures through the trees and the clouds – and teaches them a lesson about trusting one another.

MY NEIGHBOR TOTORO: THE NOVEL

“MY NEIGHBOR TOTORO is Hayao Miyazki’s timeless fairy tale for all ages and one of the most internationally acclaimed films to ever come out of Japan,” says Masumi Washington, Sr. Editorial Director. “MY NEIGHBOR TOTORO: THE NOVEL and the new edition of the MY NEIGHBOR TOTORO picture Book capture the poignancy and emotion of the story of Satsuki, Mei and their loveable fuzzy forest friends and will be wonderful additions to any Miyazaki fan’s personal library.”

MY NEIGHBOR TOTORO was released in 1988 by Hayao Miyazaki’s Studio Ghibli, which also produced Spirited Away, Princess Mononoke, Howl’s Moving Castle and Ponyo. TOTORO is an internationally popular property that has spawned a colorful array of adorable plush characters, toys, collectables and other memorabilia. Walt Disney Studios Home Entertainment released the DVD/Blu-ray Edition of MY NEIGHBOR TOTORO earlier this year.

Hayao Miyazaki is one of Japan’s most celebrated anime directors. His newest film, The Wind Rises (2013), recounts the early days of aviation and the formative years of Japan’s famed World War II Zero fighter plane designer, Jiro Horikoshi. In 2005 Hayao Miyazaki was awarded the Venice International Film Festival’s Golden Lion Award for Lifetime Achievement. Miyazaki’s other notable films include Spirited Away, which won the 2002 Academy Award® for Best Animated Feature Film, as well as Castle in the Sky, My Neighbor Totoro, Kiki’s Delivery Service, Princess Mononoke, Howl’s Moving Castle, and Ponyo, all of which have received great international acclaim. Miyazaki’s other achievements include creating the highly regarded manga series Nausicaä of the Valley of the Wind and Starting Point: 1979-1996, a collection of essays, interviews, and memoirs that chronicle his early career and the development of his theories of animation. Both are published in English by VIZ Media.