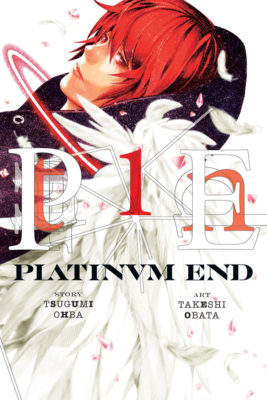 PLATINUM END launches on October 4th, is rated ‘M’ for Mature Readers, and will be published under the company’s Shonen Jump imprint. Volume 1 will carry a print MSRP $9.99 U.S. / $12.99 CAN. The series also will be available digitally from VIZ.com/read and the VIZ Manga App, as well as from the Nook, Kobo, Kindle, iBooks, comiXology, and GooglePlay stores. Future volumes of the ongoing series will be published twice a year.

In PLATINUM END, as his classmates celebrate their middle school graduation, troubled Mirai is mired in darkness. But his battle is just beginning when he receives some salvation from above in the form of an angel. Now Mirai is pitted against 12 other chosen humans in a battle in which the winner becomes the next god of the world. Mirai has an angel in his corner, but he may need to become a devil to survive.

“PLATINUM END’s digital-exclusive chapter releases have been thrilling readers and we are very excited to now launch the series on its own,” says Alexis Kirsch, Editor. “Tsugumi Ohba and Takeshi Obata’s latest creation showcases the duo’s characteristic crisp artwork and edgy storyline. We look forward to manga fans diving into the launch of the opening volume next month!”

Writer Tsugumi Ohba is the author of the hit series DEATH NOTE and BAKUMAN?.

Takeshi Obata first achieved international recognition as the artist of the wildly popular Weekly Shonen Jump title, HIKARU NO GO, which won the 2003 Tezuka Osamu Cultural Prize: Shinsei “New Hope” Award and the 2000 Shogakukan Manga Award. He went on to illustrate the smash hit supernatural crime thriller, DEATH NOTE, as well as the hugely successful manga BAKUMAN? and ALL YOU NEED IS KILL.