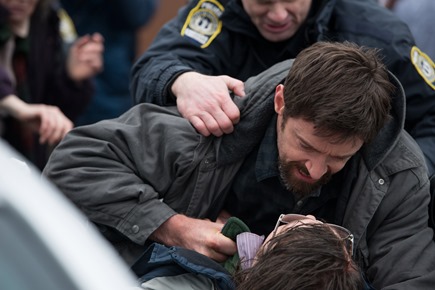 You will, almost certainly, read elsewhere that Denis Villeneuve’s film Prisoners is a revenge movie. Since vengeance cannot be enacted without there being some kind of finality to the original crime, I’m not quite how that would work. Rather, Prisoners is a psychological thriller with some nasty violence – a film that explores the depths to which a human being will sink to save his child.

Two families get together for Thanksgiving dinner. Their youngest –daughters – go out to play. They don’t come back. A suspect is found – there was an RV parked nearby, but it’s gone now – but he’s determined to have the mental and emotional development of a ten-year old and the police have to let him go. One father goes after the suspect – how can someone with the mental capacity of a ten-year old drive an RV, he asks. The detective in charge of the investigation has no answers, so he tries to find them himself.

Hugh Jackman is Keller Dover, the father who tries to find the answers the police are seemingly unable to. Terrence Howard is Franklin Birch, the other father – who tries to help Keller until his personal convictions get in the way. Jake Gyllenhaal is Detective Loki, the lead on the investigation. Paul Dano is Alex Jones, the seemingly mentally challenged suspect.

Working from a very detailed script by Aaron Guzikowski (Contraband), Villeneuve constructs an elaborate (but not too elaborate) scenario in which Dover tries to learn the whereabouts of his daughter and her friend through means that get darker and darker – while his wife, Grace (Maria Bello) sinks into a prescription drug-induced haze. Franklin helps at first, but is finally so repulsed that he has to quit – though he and his wife, Nancy (Viola Davis), determine that while they won’t help Keller they won’t stop him, either.

Meanwhile, Detective Loki follows leads that suggest that Alex might not be the kidnapper – that the girls’ disappearance might be linked, somehow, to a body in a priest’s basement. The more he strives to put things together, the more he finds himself walking a fine line between actions that can be justified and actions that cannot. 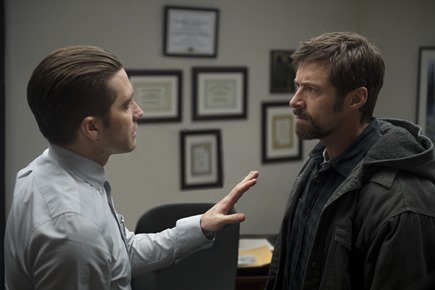 Other characters appear and disappear on the periphery – Dover’s son, Ralph (Dylan Minnette); Franklin’s daughter Eliza (Zoe Borde); Alex’s aunt and adoptive mom, Holly; Bob Taylor, a strange man with a fetish for children’s clothing, and others – but none are extraneous. Neither are there any real red herrings – which makes figuring out the mystery even harder.

Working purely as a thriller, Prisoners is a movie that will keep you on the edge of your seat (another critic at the screening I attended suggested that theaters should charge half-price since its patrons would only be using half their seats). It’s constructed beautifully; layering in character and plot details as it moves inexorably to what really is an inevitable conclusion and an amazingly appropriate final scene.

While there is some action, in the traditional sense, the movie doesn’t move at breakneck speed. Instead, that layering of character and plot builds – along with Keller’s determination and extreme methodology – through careful shot selection (Roger Deakins’ cinematography is beautifully dreary) and deft use of score. As he becomes more extreme, it is difficult for us to root for, or even identify with Keller. Neither can we quite identify with Franklin, though he at least has a point beyond which he will not pass. It’s not as hard to at least empathize with Detective Loki – there is more to him than meets the eye (judging from his multiple tattoos, his past was… colorful), and while his determination is a match for Keller’s, his tendency to cross lines is much less severe.

In the end, Prisoners is not some Charles Bronson revenge flick – it’s a look at how tragic events can scar a psyche and lead to actions we might otherwise not even contemplate. In that sense, it’s a philosophical thriller as well as a psychological one.

It might be odd to apply the Big Drink Scale to such a film, but this is a two-and-half hour movie that feels much shorter, and even with purchasing my drink an hour before show time, I still had a third of it left when I exited the theater. That, folks, is a riveting experience.