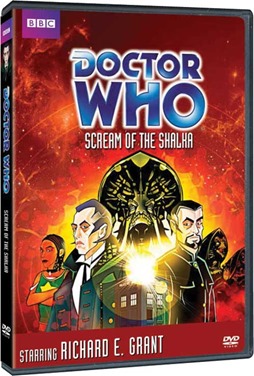 For the fortieth anniversary of Doctor Who – with no hope of a TV reboot (or any other celebration) of the show on tap – a couple of BBC employees decided to create an animated web series. Doctor Who: Scream of the Shalka was that web series – a Flash animation adventure of a slightly vampiric-looking Ninth Doctor voiced by Richard E. Grant.

In a world that might have been, the Ninth Doctor finds himself being manipulated by the Timelords and materializing in a strangely quiet English village. In a nearby pub, he realizes that the locals are terrified of something – something that is apparently drawn by noise. A further encounter with Alison (Sophie Okonedo) leads to the destruction of her home and the revelation of the Shalka – snake-like beings with control over lava – and their plan to devour the Earth.

Scream of the Shalka was a six-part serial that both celebrated the fortieth anniversary of Doctor Who’s first appearance and – due to a weird confluence of events – served as a placeholder that kept the show in the public eye until Russell T. Davies’ 2005 reboot. Over its 78-minute running time, Shalka took a totally disaffected doctor and evolved him back into Earth’s protector (much like the way Stephen Moffat evolved the Eleventh Doctor over the course of 2012 Christmas special The Snowmen).

It’s a fast-paced adventure that introduces a powerful new foe and a few intriguing concepts that might well have been fun to explore later – especially one involving The Master (Derek Jacobi).Parts of the serial even got recycled/reinvented by Davies later (mentioned in one of the DVD’s extras).

Overall, it’s a better than average adventure – the writing and the voice cast overcoming the deficiencies of the early Flash animation.

Grade: Scream of the Shalka – B