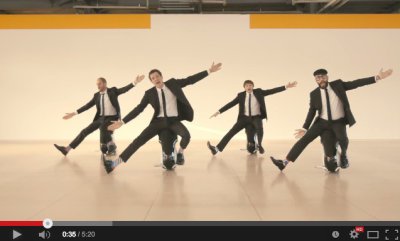 OK Go have a new album, Hungry Ghosts, and, whenever there’s a new album, there is also a new video – in this case for their new single, I Won’t Let You Down. The new video was shot in Japan’s Chiba Prefecture in August – directed by Kazuaki Seki and the band’s Damimian Kulash.

OK Go begin a world tour March 21st, 2015  will also make three special appearances prior to that: on Late Night with David Letterman (November 11th); October 29 Q&A/performance at Los Angeles’ GRAMMY Museum®, and a November 14 appearance at the Fitzgerald Theater in St Paul, MN with comic Hari Kondabolu on NPR’s Wits. Check out the video after the jump.

THE NEW CLIP PREMIERED THIS MORNING ON NBC’S “TODAY” AND CAN BE VIEWED NOW AT OKGO.NET

LOS ANGELES, CA – October 27, 2014 – OK Go is back with a new album – Hungry Ghosts (Paracadute/BMG) – and to celebrate, the band is unleashing a multitude of associated projects across a broad range of disciplines.

This morning OK Go unveiled the video for “I Won’t Let You Down,” the second single from Hungry Ghosts, during a visit to NBC’s “TODAY.” The clip, which can be viewed at okgo.net, was lensed in Japan’s Chiba Prefecture in August 2014. In preparation for the album’s release, OK Go approached Honda through their friend, creative director Morihiro Harano, with the idea to collaborate and produce a music video. The resulting clip was shot using a custom “multi-copter camera” developed for the project. In OK Go’s signature style, the action is captured in one single shot. It was directed by OK Go’s Damian Kulash and Kazuaki Seki, with creative direction by Morihiro Harano (of Mori Inc.). Honda lent the band the futuristic UNI-CUBs seen in the video. The UNI-CUB is a unique omni-directional driving wheel system that is currently in the development stage.

Details for the band’s 2015 headline theatre tour – which will kick off on March 21, 2015 at The Warfield in San Francisco, CA – will be announced shortly. In the meantime, fans can see

Continuing a career that includes award-winning videos, New York Times op-eds, a major label split and the establishment of a DIY trans-media mini-empire (Paracadute), collaborations with pioneering dance companies and tech giants, animators and Muppets, OK Go continue to fearlessly dream and build new worlds in a time when creative boundaries have all but dissolved. Apple marketing chief Phil Schiller famously called OK Go “the first post-Internet band, the first band to use the internet as a medium of art, not just commerce.”

Known as leaders in the field of social media, OK Go have recently become trendsetters in the burgeoning messaging app scene. They were the first band with a presence on Tango, where they have amassed over 400,000 followers, and are also the first band to use KIK’s brand new dashboard messaging system to communicate directly with fans. Say hi to them there at kik.okgo.net.

Other recent endeavors include:

“OK Go maintain their place as creative heavyweights of the music industry with Hungry Ghosts,” said Paste Magazine while Rolling Stone observed, “OK Go’s songs are a lot like their brilliant viral-hit videos: cute, ingeniously crafted and entertaining…” “Where so many other acts in their position might be content to rest on their laurels with a couple of catchy singles and the occasional viral video, OK Go have become a band in the habit of releasing old-fashioned, good-from-beginning-to-end albums, a feat that sometimes feels as though it’s become something of a lost art,” noted All Music. The band recorded Hungry Ghosts with longtime producer and friend Dave Fridmann (Flaming Lips, Weezer, MGMT), while also enlisting a new collaborator in Los Angeles, veteran Tony Hoffer (Beck, Phoenix).

The Future of Music Coalition, citing OK Go’s longstanding commitment to innovative business models and connecting its success with new models to broader concerns about cultural sustainability and social justice, has nominated the band for a Future of Music Honors award. The organization’s second annual reception will be held tonight in Washington, DC.

OK Go has already been honored with a GRAMMY, an MTV Video Music Award, a CLIO, two WEBBY Awards (including one for their collaboration with The Muppets and Sesame Street), a spot in a Guggenheim installation and a total of seven Lions from the 2012 Cannes Lions International Festival of Creativity – the advertising world’s most prestigious competition.

View “I Won’t Let You Down” video HERE

Tickets for OK Go: The Drop at The GRAMMY Museum HERE

“I Won’t Let You Down” remix contest HERE

“The Writing’s On The Wall” video HERE