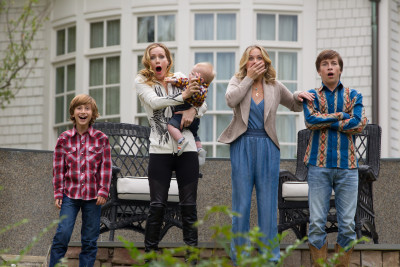 Vacation, the 29-years later sequel to National Lampoon’s Vacation, is a rude, crass hard R-rated comedy that I really should have liked – but didn’t.

One of a handful of silent viewers in a full theater of howling people, I just found Vacation to be mean-spirited and, with a few exceptions, terribly unfunny.

Basically, the idea is the same as the earlier movie in which the Griswold family went on a road to WallyWorld, a legendary theme park. Here, Ed Helms plays Rusty Griswold – the son of Clark Griswold (Chevy Chase) – who remembers that earlier trip with great fondness.

After a bad airline gag (way too soon, guys!), Rusty is all set for the family’s annual trip to the family cabin when circumstances reveal that his family have only gone on the trip because it made him happy. In a burst of inspiration, Rusty decides that the family will drive to WallyWorld. It brought the original Griswolds together; it can do the same for his family.

So Rusty, wife Debbie (Christina Applegate) and sons James (Skyler Gisondo) and Kevin (Steele Stebbins) set out in their ridiculous rented vehicle (with a remote control tab filled with arcane symbols – that cause bizarre things to happen) to emulate his fondly remembered adventure.

Let’s just say that writer-directors Jonathan Goldstein and John Francis Daley (Horrible Bosses) are not John Hughes and Harold Ramis. Their efforts to pay homage to the earlier film (Rusty gets his own hot chick driving a Ferrari – for about twenty seconds – it ends badly) fail miserably and most of their new material makes the film feel the kind of dirty that requires a shower (a stop at Debbie’s old sorority house reveals that she was… let’s just say her nickname was Debbie Do-Anything; a stop at a ‘hot springs’ (also revealed in the trailer) is not only revolting, but a set up for an even stupider joke. 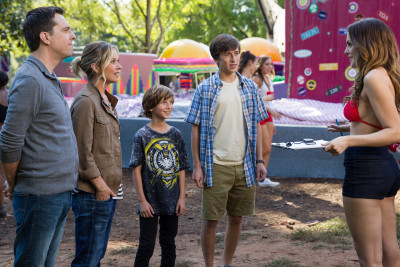 And I’m not going anywhere near the cow joke – or the eighteen wheeler.

There are some original twists and bits that work, but they are few and far between. Making younger son Kevin the foul-mouthed, athlete/bully is fresh, and Chris Hemsworth is hysterical as Rusty’s good ole boy brother-in-law, Stone Crandall (though Leslie Mann is wasted as Rusty’s sister, Audrey). The bookending encounters between economy airline pilot Rusty and an arrogant international, big airline guy (Ron Livingston) also land well.

A series of photos running with the closing credits are funnier than most of the movie, too.

The biggest problem with Vacation is that it’s too busy crapping on the Griswolds to remember that a couple moments of sweetness at the end aren’t enough make up for the stunning lack of heart throughout the rest of the movie.

In the end, all I can say is that, unlike most of the people at the screening I attended, I just couldn’t find the sadistic treatment of the Griswolds to be balanced out by what amounts to less than five minutes of genuine sweetness.