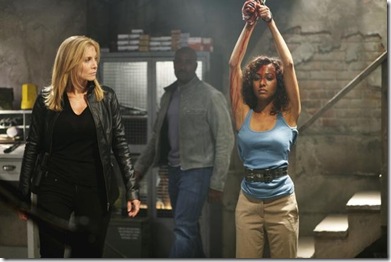 Red Rain picks up four days after last season’s finale, Red Sky. Humans are scared and beginning to swarm Visitor centers and demand explanations. As things boil over and rioting begins, the clouds open up, but their rain is red – further terrifying people. In a riot at the New York Visitor Healing Center, Tyler Evans [Logan Huffman] is hurt, giving his mother, FBI Agent Erica Evans [Elizabeth Evans] the opportunity to get onboard the alien flagship to ask Anna what is going on.

Anna proclaims the red sky/rain to be the Visitors’ latest gift to mankind. As the clouds dissipate, she tells the world that the red rain will heal the Earth’s ecology and stop global warming. Like all things V, though, there is another side to the effects of the red rain – one that has a curious connection to Erica – and Tyler!

On other fronts, news anchor Chad Decker [Scott Wolf] approaches Father Jack [Joel Gretsch] with proof that the Vs are experimenting on the humans who have volunteered for the Visitors’ Live Aboard Program and asks to join the Fifth Column – leading to a crisis for Father Jack. Fifth Column V Ryan Nichols [Morris Chestnut] is set free but Anna keeps his daughter, guaranteeing – or so she thinks – his future compliance with her plans. Then there’s Chad’s discovery that Agent Malik [Rekha Sharma] is a V – a discovery that the fifth column receives too late to prevent Erica from having to fight for her life. And the fifth column gains a new member – Dr. Sidney Miller: a scientist [Brett Harrison] who may have stumbled onto the meaning of the red rain! And I haven’t even mentioned the moral dilemma facing Erica and Father Joel – not that it’s one that bothers former terrorist Kyle Hobbes [Charles Mesure], though.

Red Rain moves like a bat out of hell and still manages to add layers to the regular characters – while introducing intriguing new arcs [there are a couple I haven’t mentioned – and they are big, too] and [literally] blowing up real good. Scott Rosenbaum and Greg Hurwitz are mindful of – and exploit – all the exposition that has gone on before, and every action-filled moment is firmly based on it. The result is that Red Rain feels like a huge payoff in many respects, while taking the series in some interesting new directions.

Veteran director Bryan Spicer has a script with a lot of stuff going, so he plunges forward with almost reckless abandon. If the Fifth column members have seemed to be running the ragged edge before, he takes things to a whole ‘nother level.

If the series had opened with as action-packed an episode as Red Rain, it might well have maintained its initial solid ratings.

Photo by Jeff Petry/Courtesy of ABC