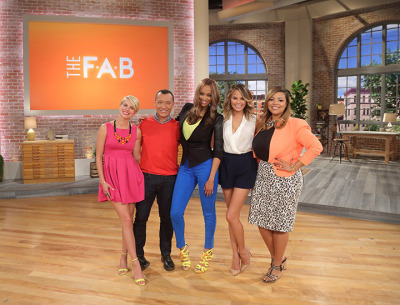 Tyra Banks is bring a The View type of talk show to syndication – with a commitment of an ABC owned station group as launch partner.

It was previously announced in May that Tyra — supermodel, businesswoman, producer and media mogul — will moderate the panel of diverse lifestyle experts. Tyra, Chrissy, Joe, Lauren and Leah will provide an entertaining hour of television, as well as daily takeaways important to viewers. “THE F·A·B” hosts will welcome celebrities, Internet influencers, experts and everyday people to share their knowledge and join in the party. From fashion and beauty to food and design to doing it yourself and even starting a business, the show will not only entertain, but also motivate the audience to make their lives more fun and beautiful.

“I am absolutely thrilled that we have sold our new Tyra Banks moderated lifestyle show to our stellar group of ABC Owned television stations,” said Janice Marinelli, president, Disney-ABC Domestic Television. “They are strong stations with outstanding leadership and are the ideal fit for our fresh lifestyle show with Tyra and her engaging panel of co-hosts.”

“Tyra and her panel of lifestyle experts share a chemistry that is energetic and extremely entertaining,” said Rebecca Campbell, president, ABC Owned Station Group. “We are excited to collaborate with our partners at Disney-ABC and air ‘THE F·A·B’ on our stations beginning next fall.”

“At 40, Tyra has never been more relevant than she is today and her massive and growing digital footprint exemplifies her connection with women of all ages,” said Lisa Hackner, executive vice president, Daytime & Syndicated Programming, ABC Entertainment Group. “Tyra has curated a fresh and authentic panel of co-hosts that is diverse in expertise, digitally connected and also share a magical chemistry. Having the support of these formidable stations is a testament to the show and the perfect timing of this program.”

Social media buff and foodie Chrissy Teigen originally planned to be a chef but discovered her passion for modeling at a young age. As a swimsuit model, Chrissy appeared on the 50th Anniversary cover of Sports Illustrated in 2014 alongside Lily Aldridge and Nina Agdal and was named SI’s Rookie of the Year in 2010. Throughout her career, she has appeared on the pages of Cosmopolitan, Glamour, Elle, GQ, Esquire, Italian Vogue and Martha Stewart Weddings. She currently serves as a host/contributor on “The Chew” and “The View” and she has made numerous appearances on “The Today Show,” “Rachael Ray,” “E! News,” “Extra,” “America’s Next Top Model,” “Watch What Happens Live” and various specials on the Cooking Channel. A social media enthusiast, Chrissy served as host of the VH1 reality competition show “Model Employee” and is currently a judge on MTV’s new food reality competition show “Snack-Off.” When not working in television or the world of high fashion modeling, Chrissy is a talented cook and the author of the blog SoDelushious.com.

Joe Zee began his career in fashion at age 22 when he moved to New York City to attend the Fashion Institute of Technology. Joe is currently the Editor in Chief and Executive Creative Officer of Yahoo Fashion, where he is tasked with launching and running a digital fashion magazine for the tech giant. Previously, Joe was the Creative Director of Elle magazine and he also held posts at Allure, W Details, House and Garden and Vanity Fair magazines. For three seasons beginning in 2010, Joe starred in and executive produced the non-fiction series “All On the Line With Joe Zee” for the Sundance Channel. He is a frequent fashion and pop culture contributor, appearing often on “Good Morning America,” “The Today Show,” “Extra,” “E! News” and  “Access Hollywood.” He can currently be seen on “Entertainment Tonight” as their resident Fashion Correspondent.

Lauren Makk is a popular television host, interior design professional, home expert and life stylist. She debuted her skills as one of the newest designers of TLC’s Emmy award-winning “Trading Spaces” and she tackled major construction problems on A&E’s “Drill Team.” Currently, Lauren can be found empowering homeowners to create the home of their dreams through savvy design advice and budget friendly tips on Honolulu’s KHON-TV. Her national design business, Lauren Makk Interiors, specializes in affordable luxury and creating incredible transformations — always under budget.

Leah Ashley is a do-it-yourself (DIY) YouTube sensation and lifestyle blogger who co-created the website and YouTube destination “A Fab Life!” Both the website and channel are lifestyle guides for the glam girl — a girl who delights in the good life and partakes in the finer things — regardless of her bank balance. Leah has been featured on CNN, HGTV, KTLA, Discovery and in Glamour magazine, to name a few. She offers her expertise to private clients in wardrobe, décor and events and has done trend forecasting for Fortune 500 companies such as Pepsi, Target and Sony, digital consulting as well as multi-platform brand integration through original video and editorial content.

The talk show will broadcast from Los Angeles and Tyra Banks will serve as executive producer. It will be produced by Disney-ABC’s Summerdale Productions and distributed by Disney-ABC Domestic Television.

About The Disney/ABC Television Group