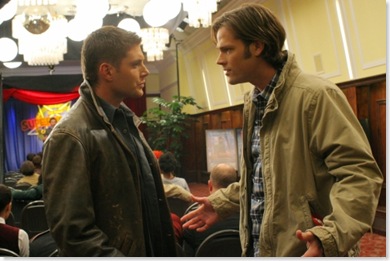 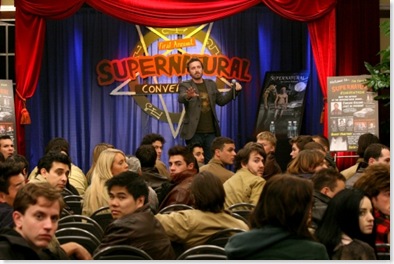 The most obvious difference between the fictional Supernatural convention and the real one is the size of the audience. In S5.09 The Real Ghostbusters, Carver Edlund aka Chuck Shurley (Rob Benedict) along with super devoted fan Becky (Emily Perkins) take over a small hotel to hold a convention for the avid readers of Carver Edlund’s Supernatural books to gather together in for the convention. The audience of avid readers/fans of the books only partially filled a large conference room. The audience of avid viewers and fans of the show Supernatural who came to the real convention filled almost to capacity the grand ballroom of the Wyndham O’Hare Hotel in Chicago Ill. Speaking of audiences for the fictional convention in the episode, the first thing that gave me as a veteran con goer a big laugh about it was the predominance of men in the fictional audience as opposed to the predominantly female audiences that are found at the real conventions, Though this time around at Chicago there were a lot more men in the audience because of the presence on the headlining list of lovely ladies Traci Dinwiddie, Alona Tal and Julie McNiven.

A few other major differences could be found as well. Sam and Dean were tricked into attending the fictional convention – Jared and Jensen were paid to attend the real one. Sam and Dean were attacked by a ghost haunting the convention hotel – Ackles and Padalecki got writer’s cramp from signing hundreds of autographs and blinded by camera flashes going off. Sam and Dean could roam the halls freely – Jensen and Jared had to spend time in photo op lines, special breakfast appearances and on stage doing Q&A with the crowd. Sam and Dean got startling information from fangirl Becky about where the mystical colt had really gone off to – Jensen and Jared were again reminded of the amazing generosity of their fans who helped Jared raise money for the University Interscholastic League his Mother is involved with by one of them ultimately making the winning bid of $3500 on a Nixon wristwatch that Padalecki had worn in Supernatural season 3.

The major difference though was no fans died in Chicago while attending The Creation Salute to Supernatural. I think that’s a good point at which to start focusing my commentary solely on S5.09 The Real Ghostbusters, the point at which fictional does not mirror reality at all. Which probably makes Gary and Adam of Creation Entertainment very happy that none of their valued customers were harmed or killed by vengeful spirits while attending their awesome Supernatural convention this past weekend!

There is no denying that S5.09 The Real Ghostbusters had some controversy going into it’s airing and, it seems, a lot more coming out of that airing. It’s always a tricky thing when writers and creators of popular shows start poking gentle fun at or doing what they honestly believe are heartfelt homage’s to fans of their shows. Supernatural has done it not once, but three times now and twice in this current season alone. We first met Becky Rosen(Emily Perkins) in the S5.01 episode Sympathy for the Devil . 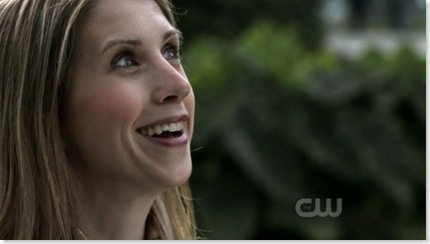 Becky Rosen is a bright, articulate and cute blonde girl in her mid twenties. She writes Wincest but is totally enamored of Sam Winchester. She is devoted to the Supernatural stories and to the brothers. I have heard that some in Supernatural fandom think Becky Rosen is based on one specific person. I have to disagree on that one. To me having been in the trenches with the fans, Becky embodies many aspects of different fans and parts of fandom as a whole. She is an amalgam of things that fans do and say: some on a moderate level and some on an extreme level. Becky is not just the ‘bad fan’. To me she represents the ‘good fan’ as well.

She is smart, strong willed and despite their not quite being comfortable with her intensity about Sam and her devotion to ‘the brothers’, Sam and Dean have respect for her as a person. Not once does Dean ever suggest to Sam that he take advantage of Becky’s interest in him. Never once does Sam think to cross that line on his own either. When it comes to Chuck Shurley, he wants Becky to see him for himself as a person and in the end they made it clear that both he and Becky see each other as such. And isn’t way cool that maybe Eric Kripke is saying that he thinks the women in his fandom are, for the most part interesting enough to date if he wasn’t married?

Ok so maybe Kripke wasn’t going that far, but I chose to believe that in this presentation of how Becky is treated by Sam, Dean and Chuck, that the writers, producers and actors of Supernatural are making it clear that they have a deep respect for the fans and don’t see the women in it as someone to take advantage of or cross lines of disrespect with. I believe it’s a lesson that maybe some parts of fandom should learn in turn regarding the lead actors. My favorite part about how Becky is presented is that she is shown as being pivotal to where the story was going next. To me that represents a homage to how important to ‘where the story goes next’ the fans and viewers are; because without them watching and paying attention, the only place Supernatural would go is to cancellation/syndication hell. I think that makes Becky a pretty special as a character.

S5.09 The Real Ghostbusters also seemed to be more than a tap on the shoulder to the fans and viewers, I feel that there was a lot of commentary in the episode about how not just some aspects of fandom, but how the tabloids as well seem to blur the lines of privacy and treat the lives of real people as if they were fictional stories to play around with and make whatever you want out of. The interesting thing about how this episode was written is that it didn’t just focus on one side of the issue as it could so easily have done. The writers and producers instead chose to look at both sides of the argument and deal with the valid points that both sides have to make about the issue. Kudos to them for that kind of bravery and not allowing ego to get in the way or go on a ranting power trip. 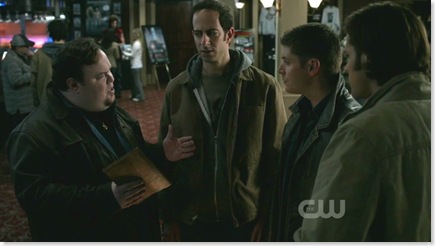 I like how they also dealt respectfully with the gay community of their fandom. I loved what appears to be a respectful and friendly ‘shout out’ to two male fans on the Supernatural and Jensen Ackles IMDB boards that met each other through their mutual interest in the show and the actor. ‘Angelwings’ and ‘HolyTaxAccountant’ have been going strong as committed couple for several years now and it was the show they love and an actor they admire who brought them together. And I had to recognize a bit of a poke at viewers like myself who get a bit too caught up in the minute details and the slightest deviations from canon or inconsistencies within established characters. I agree that people like me have got to be very frustratingly annoying to the writers, producers and directors sometimes and it was probably very satisfying to ‘kill one of us off’. I got it, I wasn’t offended by it and applauded them for their candor in doing it. Of course that won’t stop me from continuing to do it. No sirree they are stuck with me!

S5.09 The Real Ghostbusters, was a sort of exposition episode wrapped around the core need to have Sam and Dean find out where the mystical Colt really went and how to find it. I am intrigued as to how they are going to work the Colt into this and how it’s going to be used or if, at the last minute, the writers are going to back off from what might be considered to ‘deus ex machina’. I know I was listening to a discussion among some others about how could the Colt kill Lucifer when it’s a demon-killing gun and he is an angel. I was all set to wonder that myself then I realized that back in S1.20 Dead Man’s Blood, John Winchester said that Samuel Colt created a gun that ‘could kill any kind of supernatural creature’. So it would stand to reason that whatever symbols carved on it to give it power are also strong enough to work on angels as well as demons and vampires.

So overall, S5.09 The Real Ghostbusters was a fun kind of filler episode that managed to make a few moral points and point out a few flaws on both sides of the camera when it comes to everyone who loves Supernatural be they fan, viewer, actor or writer.

Tomorrow, the last brand new episode of Supernatural season five for the year airs on the CW Network at 9PM EST and new episodes of season 5 will return in January of 2010. The episode airing tomorrow, Thursday November 19th is S5.10 Abandon All Hope. To protect the spoilerphobes among my readers, I’ll talk about this in another posting in which I will share sneak peek looks at the episode.