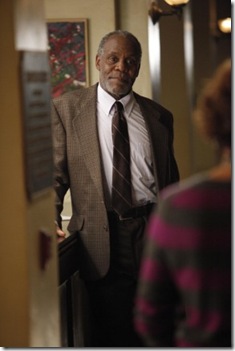 Fox’s Touch [Thursdays, 9/8C] is a series that explores the interconnectedness of everyone and everything in the world through the story of Martin Bohm [Kiefer Sutherland], a single father and his silent, genius son, Jake [David Mazouz]. Helping him to understand how to communicate with his son is retired university professor, Arthur Teller [Danny Glover].

Danny glover recently took a few minutes out if his busy schedule to discuss the themes of the show and Teller’s part in Martin and Jake’s journey.

Hello, Danny, thanks for taking time to talk to us.

So in the pilot we only get a glimpse of Arthur Teller. He seems to have a lot of answers. Could you talk more about your role on Touch?

Glover: I think we get certainly a sense of him and some of what we’ve learned and understand about the world with Arthur Teller; it’s a world in which is, it’s quite different from the world that the other characters are associated with. He brings us into this world where when numbers matter in a different way that the sequence of numbers, the world that he is in contact with, one he himself understands, or has a glimpse of in his own relationships, his own context. Now he comes to a world that facilitates us finding answers to what is happening with this young boy in which his world is solving problems and find the interconnection. I think when you think about Professor Teller, it’s always about the interconnection between people and between certain things.

Could you also talk about how you got involved with this project?

Glover: I don’t know if this is just a particular moment, because a great deal of my career has been associated with films and …. It seems as if I believe that some of the writing and some the storytelling is on screen in television, whether it be on cable or network television, provides another platform for actors who want a little bit more or have considered acting a craft that they wanted for different .… Certainly the small screen provides that … provide us with an opportunity. That’s one aspect of it.

The other aspect of it is that fewer of the feature films that we get associated with are being made. That’s another reality. Wherever an actor finds work, and work that sustains him, both as an artist and as someone who needs to be gainfully employed, that’s what you do. There’s no mistake about it. There’s no mystery about that. 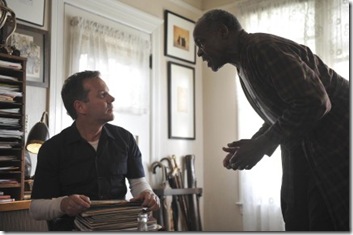 Danny, since you’ve had a lot of experiences as an actor that normal people don’t have, was it easier to connect with Arthur Teller?

Glover: There’s some way in which I think given the ways in which the world in which we find ourselves and our experiences as human beings, as an artist, as an actor, and ultimately if you just kind of catalog those experiences that I have, which creates another avenue to understanding my own self. That’s a conscious effort. That’s something that I do and look for consciously throughout my life, throughout the connections that I’ve made in my life, etc., etc.

Most of us accept those things in a way and don’t have the opportunity to explore them in the way that I do as an artist. I can lend you a half dozen examples of that that’s happened to me on a monthly or on a weekly basis where something happens, some kind of connection that I make is connected to another relationship that I have, etc. I’m blown away by it, because I have a storehouse of that, or a file cabinet of those kinds of experiences that I have to draw on as well. I like the idea of this sense of inter-connectiveness that we often find and that we often dismiss or pay little attention to it in our own lives.

I think that the show perhaps provides an audience with an opportunity to find and nurture those experiences in their life, because when it ends, I don’t know, because that is dependent upon the individual, and how the individual accepts and approaches and embraces those themes, which they find out of the norm in their lives. But the show provides them the opportunity to look at that and how important is that in the future?

I think the human species has always looked for different various ways of finding the connection and living on another plane or discovering another plane in their relationships. That happens perhaps, and I’m just throwing this out because I didn’t live 1,000 years ago, perhaps those connections were more available and more fruitful and more dynamic 1,000 years ago. Maybe because of technology and everything that comes into our lives, we lose that. Maybe because of our own alienation from each other as an individual in relationship to community we lose those things, so maybe we have a chance to rediscover them.

I’ll jump out on a limb and say that perhaps our next advance as a human species is to rediscover those particular things and really understand them given all this technology that has dictated … our lives.

Mr. Glover, can you tell us just a little bit about what it’s like working with this cast? I know Kiefer, in particular, had a lot of good things to say about David, especially for his age.

Glover: Oh, wow, certainly the boy, he does so much work in silence. Really, the beautiful thing about acting is that it is, silence is a vital part of acting; it’s the essential part of acting. Certainly, I mean, the people who get the chance to look at the outtakes or the dailies in the series and that provides an understanding of the kind of visual language that’s necessary in approaching this story and this character from this story.

When it comes to David, of course, the visual language is essential, because he has no words. He has no words at all, so I think that … has been encouraging, wonderful and supportive. That’s been the case with those people who come on that were part of the cast, beyond just Kiefer.

My question for you is what is the one thing you want your legacy to be? You’ve been around as a humanitarian, as an actor. Which one do you think is going to be your bigger legacy?

Glover: I think that my legacy certainly will be that I’ve been able to create the space for me to act and as an individual come or frame within my association with who I am as a citizen, as part of a community. I want to believe that I take that—I want to think that I take that very seriously. And the things that I say are the things that I do are reflected not only in my work, my life can also in the work that I do to try to bring people together or to be part of a group of people .…it summarizes how we change, how we evolve, we develop … in the next century or the first part of this century and it’s great.

I’ve lived essentially two thirds—not quite two thirds, but I’ve lived about, my life encompasses more than 50% of the 20th century. So I lived more than half of the 20th century. I don’t propose that I’m going to live half of the 21st century, but I’ve seen a lot of things that have happened and changed. I wanted to feel that … that whatever I do within the group or whatever I do as an individual were reflective of those changes and celebrate with those changes.

That is so wonderful. Thank you so much.