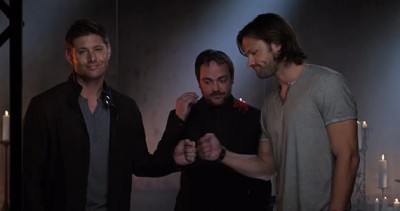 If you can’t get enough of the Winchester boys, then you will want to know about February’s five Supernatural marathons on TNT.

TNT is running Supernatural Superfan Wednesdays with select adventures of Sam and Dean from 1/12C – 8/7C. On President’s Day, the network will present the Supernatural Super-Meta Marathon from noon/11am C to 10/9C.

Check out episode titles and times following the jump.

TNT is celebrating Supernatural fandom this month with Supernatural Superfan Wednesdays, seven-hour, themed marathons of episodes airing from 1-8 p.m. (ET/PT) every Wednesday in February. In addition, TNT will set aside President’s Day for a 11 hours of fan favorites, as well as episodes featuring meta storylines. The Supernatural Super-Meta Marathon is set to air from noon to 11 p.m. (ET/PT) on Monday, Feb. 16.

In honor of Supernatural‘s passionate fan base, TNT will highlight select fan tweets on-air throughout the Wednesday marathons. To take part, fans can tweet their thoughts using the hashtag #TNTRewatch.

A complete schedule of TNT’s February Supernatural marathons, including episode titles, is included below.

Supernatural, which is currently in its 10th season on The CW, is produced by Warner Bros. Television in association with Wonderland Sound and Vision, with McG (Charlie’s Angels, The O.C.), Robert Singer (Midnight Caller), Jeremy Carver (Being Human), Phil Sgriccia (Revolution) and Adam Glass (Cold Case) serving as executive producers.

Supernatural Marathons on TNT in February

Feb. 4: “The Winchesters: Why So Serious”

TNT is television’s destination for drama. Seen in 101 million households and ranking among cable’s top networks, TNT is home to such original drama series as Rizzoli & Isles, Major Crimes, Falling Skies, The Last Ship, Murder in the First, Legends, The Librarians and Transporter The Series. TNT’s upcoming slate of original scripted dramas includes Public Morals, Proof and Agent X. TNT also features such dramatic unscripted series as Cold Justice, On the Menu and the upcoming Wake Up Call. In addition, TNT is the cable home to popular dramas like Castle, Bones, Supernatural and Grimm; primetime specials, such as the Screen Actors Guild Awards®; blockbuster movies; and championship sports coverage, including the NBA and the NCAA Division I Men’s Basketball Championship.