The movie is told, more or less, from the point of view of Judd Altman (Jason Bateman), the engineer for a shock jock radio show who has carefully managed his life so as to avoid any major upheavals. Naturally, it all goes sideways for him – when he manages to get off work early to surprise his girlfriend (Abigail Spencer, Rectify) with an awesome birthday cake, he finds her in bed with his boss.

In short order, he’s moved out, quit his job and fallen into a bit of a depression – which is when he learns his father has died. Back at home for the funeral, he is reunited with his industrious older brother Paul (Corey Stoll, House of Cards), buttoned up married sister Wendy (Tina Fey, 30 Rock) and flaky, self-involved younger brother Philip (Adam Driver, Girls) – all under the imperious eye of pop psychologist/author mother, Hilary (Jane Fonda), whose new set of boobs only adds to the dysfunctional family’s impending group breakdown.

Penny has a tendency for blurting out everything she’s thinking – in a much sweeter way than Hilary (who got rich by writing self-help books about her family); Alice is frustrated because she and Paul have been trying to have children (she’s also Judd’s ex-girlfriend) and Horry remains sweetly innocent because of a brain injury from a car accident (from which Wendy emerged comparatively) unscathed, and Tracy loves Philip but is completely aware that it won’t end well.

Then there’s the rabbi (Ben Schwartz) who tries to be hip and cool, but whom the family still calls Boner… 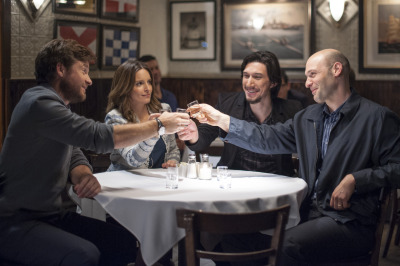 The trailers for This Is Where I Leave You would have us believe the film is an R-rated comedy romp but it’s more a dramedy – for every comedy beat, there’s unexpected drama (and pretty much all the boob jokes are in the trailer… sorry!).

Adapted by Jonathan Tropper from his novel, This Is Where I Leave You is a mass of mostly familiar plot points and every character gets a moment to shine, but the idea of sitting shiva – the Jewish seven day mourning cycle – is just different enough to cast those moments in a fresh light. Especially since the Altmans seem to have less than a peripheral sense of the religion (Wendy points out that Hilary’s shiva chair is where they usually put the Christmas tree…).

Of course nothing is ever simple for the Altman crew – Alice tries an unconventional approach to getting pregnant; Wendy bluntly informs Judd that he’s going to sleep with Penny to get even with Quinn before taking her back; Hilary is way too candid about everything – her late husband’s prowess and endowment including; everyone seems to envy everyone else for reasons that prove suspect. Then Quinn informs Judd that she’s pregnant – and has a very good reason for believing that the baby is his.

Taking a slightly different approach to standard dysfunction family reunion tropes requires a cast that can deliver and director Shawn Levy has that in this collection of TV all-stars and minor movie stars. Most of them are used to functioning within an ensemble and play off each other with a good deal more grace than absolutely necessary.

Fey is very good in a role that is not played in any way for laughs. She’s the straight man even more than Bateman is. Britton has the most quietly powerful scene – in which she and Bateman have the kind of emotional honesty that other films of this sort (*cough*August Osage County*cough*) lack, but Hahn and Bateman have a sequence that almost equals it (and is far funnier in an uncomfortable sort of way).

Levy shows a surprising grasp of subtlety here, too. As well as the expected laughs (with an ensemble that really do that), he also gets the film’s drama and does a good job of modulating the levels of humor and drama in a way that makes us believe that Date Night and Real Steel weren’t flukes.