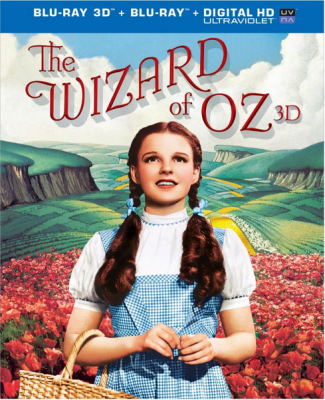 I’m a sucker! That’s all there is to it, I own the last 4 Blu-ray releases of The Wizard of Oz. It is one of my favorite films of all time and while I hate the idea of slapping 3D onto classic films for no reason other than cheap marketing, I found myself getting sucked in and excited for the The Wizard of Oz: 75th Anniversary Edition 3D release.

I’m not going to waste your time reviewing a film that everyone has already seen a million times, let’s just dive into the features.

The Wizard of Oz 75th anniversary edition comes in several different flavors, the regular single disc Blu-ray, a 3D Blu-ray Combo Pack and the Mega Collector’s Box set. I was seriously eying the Collector’s edition, but since I already own 4 copies of this movie decided to just go for the 3D Combo Pack with the Steelbook packaging.  When you open it up, the only thing included is a little slip of paper with the Vudu Code and an advert for the Wizard of Oz book. It seemed oddly plain for a 75th edition release.  The 3D Blu-ray and 2D versions are on two separate disks with all the bonus features on the 2D one.

This 1080p transfer is really inconsistent. The 70th Anniversary version was sampled from a 4K print, this time they used an 8K print for the base. The “downsampling from 8K” seems to have caused a lot of spottiness in the oddest places. For instance when Dorothy starts her journey after the Munchkins sing the Yellow Brick road looks weirdly grainy/fuzzy, while the rest of the shot looks fine. There are several instances where Dorothy’s face looks washed out.  While the 3D did add depth to the picture it was distracting if you are someone who is used to watching this in 2D, and it wasn’t done very well. Characters seemed a bit distorted and the early black and white scenes where dark and contained obvious grain. I really thought there was something wrong with my eyes or my 3D TV, so I put in The Little Mermaid 3D as a “comparison” and yeah, this just doesn’t stand up.

It is rare that a Blu-ray release actively ticks me off but this one really does. It is outrageously expensive for the bare minimum that it delivers on. The extras are the same ones from the single disc 70th anniversary release with a worse transfer and lousy 3D. Warner Home Video completely phoned this in and really give fans the shaft here. The entire exercise just feels lazy. The 70th Anniversary Edition remains the gold standard.