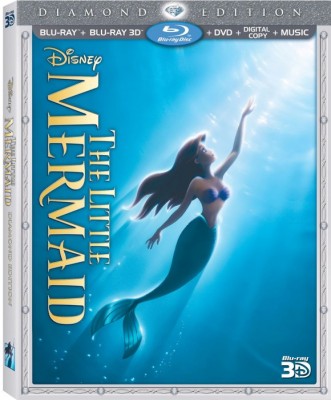 Yes, I know everyone has seen The Little Mermaid. Everyone, except me apparently. This is my first experience with this wondrous movie. It is a classic for a reason, it is a gorgeous piece of work that really shines on Blu-ray, especially the 3D version. It is so immersive and intense that you cannot help but get swept up in the world Directors Ron Clements, John Musker and their animation team created.  This is another example of why hand drawn animation will always be better than computer generated animation.  There’s just a certain feeling of life that permeates every frame of this movie that can’t be duplicated by the sterile feel that computer animation produces (yes, I’m including Pixar in this). I miss seeing the nuances of a well thought out brushstroke.

A lot of Disney’s Blu-rays maintain the original 4:3 aspect ration which results in black bars on the sides. I love that, this time, Disney used a 1.78:1 transfer. It filled up my entire 55 inch television screen.  This features a 1080p/MVC-encoded 3D presentation and it is flawless. If you want to sell 3D TV to families, stores need to showcase Disney’s recent 3D post conversion efforts. Animation just lends itself to 3D far more than live action. The colors used in animation are already bright, so 3D doesn’t detract and in the case of computer animation like Toy Story those were done with 3D in modeling to begin with. Alan Menken’s (with Lyrics by Howard Ashmore) soundtrack/score sounds beautiful with this new 7.1 DTS Master Audio mix. Ariel (Jodi Benson) and all the classics like Under The Sea never sounded better.

How can I complain about this release?  Great movie, Great transfer and nice mix of extras. As a showcase for 3D post conversion The Little Mermaid 3D Diamond Edition is reference quality work.