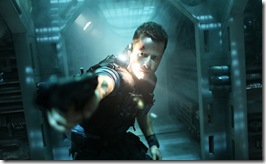 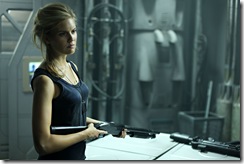 Snow [Guy Pearce, The Hurt Locker, Animal Kingdom] is about to be convicted of murder and, possibly, treason [need we say that he’s been set up?] when The President’s daughter, Emilie Warnock [Maggie Grace. Lost, Taken] is taken hostage along with the staff of the first orbiting prison. So, he’s offered a deal – save Emilie and he has a shot at freedom – when Secret Service Agent Shaw [Lennie Henry] suggests that one man might be able to gain access to the prison where a battalion of marines might just get everyone killed. This does not please his associate, Langral [Peter Stormare]

Lockout opens with a five-minute sequence that juxtaposes Snow’s interrogation at the hands of Langral with the sequence of events leading up to his capture. This sets up a sinister undercurrent to Langral while establishing Snow’s action hero cred and tendency to be a smartass.

Once Emilie has been taken hostage, the prisoners – who have just come out of stasis [some with less than optimal recovery] – space the prison’s warden. Just before he can tell them who she really is.

Pearce, who is always terrific [even in turkeys], really commands the screen and gives us moments when we can see that snow is more than just a wiseass action machine. Grace is feistier than we usually see her – like Shannon in Lost only minus the whininess. Just as there’s more to Snow than meets the eye, Emilie is not the spoiled princess we’re expecting.

An inmate named Alex [Vincent Regan] takes control and attempts to deal with the LOPD [Low Orbit Police], but his crazy brother, Hydell [Joseph Gilgun] keeps doing crazy-stupid stuff that undermines him – even before they learn who Emilie really is.

Shot on a thirty million dollar budget, Lockout should suffer from the video game-grade CG effects, but somehow, like the Roger Corman Battle Beyond The Stars, the cheapness of the effects actually adds to the fun. They give the film a sense of surreality that provides another level to the ongoing madness.

The script, by co-directors James Mather and Stephen St. Leger with producer Luc Besson [from a story by Besson], follows a well beaten path, but tosses in odd variations that keep the audience from being too sure about where things are heading. An example would be the way Snow finds Emilie with almost no effort at the end of the first act – before things really go sideways in an unexpected fashion.

While the film’s end point may be certain, the path taken to get there is filled with peculiar detours that make the film feel a lot fresher than it really is.

The long and short of it is this – Lockout is a Luc Besson take on John Carpenter, filtered through roger Corman. On that level, it works just fine. It’s not high art; it’s not saying stuff. It’s just ninety-six minutes of loud, balls-to-the-walls fun. And there’s nothing wrong with that.

One thought on “The Spirit Of Snake Plissken Lives In Lockout!”