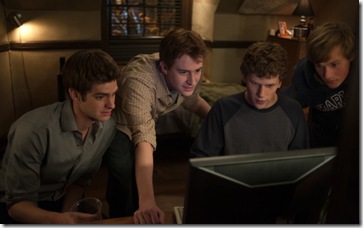 It’s a tale of sound and fury; friendship betrayed; money and the internet. The social Network may be the story of how Mark Zuckerberg created Facebook, but it has Shakespearean range and moves like a Jason Bourne movie.

From the moment we meet Zuckerberg [Jesse Eisenberg] and his soon to be ex, Erica [Rooney Mara] ‘til the haunting final scene with Zuckerberg slumping over his laptop hitting the refresh key over and over, The Social Network is a rush – a film best appreciated by someone with ADD and/or classic movies.

What I mean by that is that TSN doesn’t linger on any one scene overlong, but it is constructed like a classic thriller. We’re several minutes into the film before we discover that what we are seeing is, in essence, testimony by Zuckerberg, his one-time best [and only?] friend Eduardo Saverin [Andrew Garfield] and a set of ultra-WASPy identical twins, Cameron and Tyler Winklevoss [both played by Armie Hammer, with Josh Pence providing the body for Tyler in a masterful bit of CG work] – at two different depositions for lawsuits against Zuckerberg. The result is that the film has a somewhat unreliable set of narrators and what we’re seeing might – or might not – be the way things really happened [material from the actual depositions were used in making the film].

From that opening scene where Zuckerberg gets dumped by his girlfriend, he is shown as a character that is the smartest guy in the room and knows it. He seems to have no filters between his brain and his mouth – if it crosses his mind, he says it – even when the result is being called an a$$hole and dropped like the proverbial hot potato. When he vents his spleen on his blog – while creating a website to pick which Harvard co-eds are hottest – that impression is heightened.

Enter the Winklevi [as he refers to them] with an offer. If he helps them set up a dating website called Harvard Connection, he will gain entry to an exclusive “final club” – one to which Eduardo has been invited – and gain a measure of redemption for crashing the Harvard network with the co-ed rating site. He stalls them because he’s decided to work on his own project – which will become the title social network – and gets financial aide from Eduardo, who becomes CFO of thefacebook.com once it’s up and running.

Then, while attempting to expand the website to other schools, he and Eduardo meet Sean Parker [Justin Timberlake], founder of Napster, and his ideas engage Zuckerberg. Before you know it, the site is called simply facebook.com and is everywhere – and Eduardo is maneuvered out of the company.

It doesn’t sound like you’d get a thriller out of the material, but with the razor sharp script from Aaron Sorkin [Sports Night, The West Wing, A Few Good Men] and energetic direction from David Fincher [Zodiac, Fight Club, Se7en], the result is a breathtaking ride.

Eisenberg gives his best performance yet as Zuckerberg, moving from scene to scene three steps ahead of everyone else and contemptuous of anyone who can’t keep up. He clearly knows about social etiquette but seems not to believe that it applies to him – though he can use it when expedient to do so.

Garfield’s Eduardo is the broken heart at the center of the film. He does everything he can to help Zuckerberg with his project, but winds up cast aside like a broken toy – and Garfield makes us believe his faith in Zuckerberg and his broken heart when he’s finessed out of the company.

Hammer brings just the right level of arrogance and outrage to the Winklevi, who are stunned at the magnitude of indifference they face when they attempt to gain justice for what they perceive as identity theft.

Mara is also fine as Erica, whose humiliation by Zuckerberg is profound. In a definite change-up role for a former Disney star, Brenda Song is also terrific as Christy, a geek groupie who becomes Eduardo’s girlfriend – and is totally psycho!

For a lot of people, Justin Timberlake will be the biggest surprise of the film – though for those who’ve seen Alpha Dog and Black Snake Moan his performance will not. He nails the sleazy, hucksterish charm of Sean Parker with apparent ease – and gives him a cheerful insidiousness that is very alluring to business neophyte Zuckerberg.

The Social Network is, like the vast majority of fact-based films, a fiction based on fact, so it may or may not be entirely accurate. Regardless of any metaphors that may be present – or perhaps because of them, what it is, is one of the best films of the year.