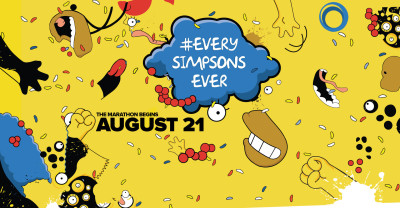 Who is watching the 12 day Simpsons marathon on FXX network? A hell of a lot of you? Day 1 ratings have broken channel ratings to become the most watched day in its history.

When FXX landed the exclusive cable syndication rights to the landmark animated comedy series The Simpsons last November, it was the biggest off-network deal in television history: a record 552 episodes and counting. Well, it may only be one day, but it looks like a very big deal for the success of FXX, the newest channel from FX Networks that launched on September 3, 2013.

In what is believed to be the longest marathon in television history, day one of FXX’s 12-day marathon of The Simpsons recorded the network’s highest Total Day and Primetime average ratings for a single day ever for the network.

“We knew that The Simpsons could be transformative for FXX and its performance yesterday truly exceeded our wildest expectations,” said Chuck Saftler, President, Program Strategy and COO, FX Networks. “It is a testament to the power of one of the greatest shows in television history and the genius of Jim Brooks, Matt Groening, Al Jean and everyone associated with the show. Their support of our launch has been invaluable. We’re off to a great start, we still have 11 days of binging left in our record-breaking marathon, and many years of The Simpsons to come on FXX. WOO HOO!”