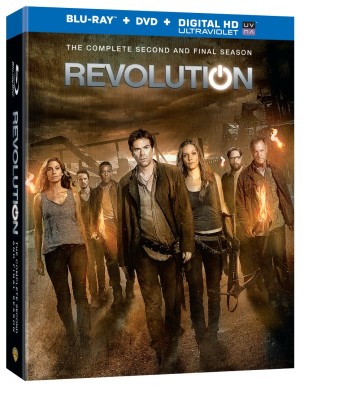 While many (including me) were reveling in the bat$#! craziness of Sleepy Hollow and The Blacklist, at least as many (again including me) missed out on the degree over directed insanity on the second season of Revolution, which bled a lot of viewers between seasons.

It runs out that Revolution was best appreciated by binge-watching. On a weekly basis, the series seemed to be losing its mind, but viewed several episodes at a time, it’s a heckuva lot of fun.

For a series about a world without power and technology, there certainly was a lot of power and technology in the first season – culminating in a nuclear option put into play for the season finale. Season two was filled with all kinds of stuff, but power and technology played a more minor – if no less crucial – role. It also took the road movie aspect of the show and ditched it, firmly, setting most of the action in and around the town of Willoughby, Texas – something that let its moments of silliness shift from lame to bat$3!+ crazy.

Before the second season is too far along, we’ve got the arrival of the (alleged) U.S. government in the form of uniformed soldiers who appear to be saving the town from a wandering gang of refugees from Mad Max (one of whom kidnaps people looking for blood ‘donors’ to keep his diabetic wife alive – and, by the way, he’s also a pedophile). The soldiers are led by Ed Truman (Steven Culp, who does innocuous evil so well it’s scary). They call themselves Patriots – which harkens back to the final moments of the season one finale.

There are Texas Rangers; Aaron (Zak Orth) gets a superpower, and the on-again/off-again bromance between Miles (Billy Burke) and Monroe (David Lyons) continues to run hot and cold (that might have something to do with Charlie bringing him along to Willoughby – or not…). Plus a sleek tall ship arrives bearing a genuine (again, alleged) representative of the government, Secretary Justine Allenford (Nicole Ari Parker), who will soon having an intriguing relationship with Tom Neville (Giancarlo Esposito).

Rachel (Elizabeth Mitchell) continues to be the smartest person in whatever room she’s in – but definitely lacking in wisdom (her favorite tactic is announce she’ll be more careful just before she emulates the proverbial bull in the china shop). Eventually, though she does learn, and by season’s/series’ end, she’s actually behaving like there are a couple sane bones in her body.

Aaron’s creepy new power costs him one girlfriend and takes over another (yet another character arc that has had the crazy stick taken to it), but where’s there life, there’s hope.

New character Dr. Gene Porter (Stephen Collins) is Rachel’s dad/Charlie’s (Tracy Spiridakos) grandfather – and not at all thrilled about the company they keep (Pot. Kettle. Black.). He adds one more arc that goes the complete reversal route. A couple of times. While Miles’ best advice to Tracy is, ‘try not to be too stupid).

In between bouts mayhem ranging from bare fists to explosions, there are betrayals, double agents, artificial intelligence and more politic movements (fore and backtracking, shifting alliances and one-upmanship) than almost any other series on television last season.

Throughout the season, the show’s only real flaw was getting too caught up in the crazy from time to time and some arcs suffered from it (Neville’s alliances, for example).

Seriously, watching Revolution makes one wonder – it’s like something written by Machiavelli, Class Clown. All twisted and convoluted and unimaginably silly – but somehow entertaining even as it goes off the rails.

I didn’t get that at first, which may be why I stopped watching season one after four episodes. Still, I had no trouble figuring out where season two was going after barely a handful of minutes – and I certainly had no problem staying with it for its last even more strung out episodes.

Season two of Revolution turned out to be jolly, silly, crazy fun. Not Shakespeare by any means, but not Manimal (or Flash Gordon), either.

Extras: Revolution: Heading West (half-hour featurette of the writers and Jon Favreau discussing why the second season was no longer a road movie); Impact Revolution:  Conversations With The United Nations (featurette on how Revolution was used to show situations that are real for over a billion people in the real world); United Nation: The Mission Continues PSA; 2013 Comic-Con Panel Q&A with Cast and Creators; Deleted Scenes; Gag Reel