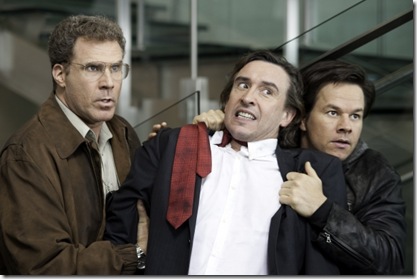 Gamble is a forensic accountant who prefers to be behind a desk, working his computer. Hoitz, who at first seems like the “conventional” cop to Gamble’s flake, is actually every bit of unconventional – just in different ways. Most of the movie’s humor does, in fact, come from the way their idiosyncrasies just don’t align, causing all kinds of friction – even when they’ve managed to figure out to a way to work together.

True, Gamble is a typical role for Ferrell – the buffoon who is completely oblivious to just how wacked-out he really is – but the difference here is that he’s working with the strongest material he’s had in ages, courtesy of co-writer [with Chris Henchy]/director Adam McKay [Anchorman, Talladega Nights]. You can tell the writing is strong because Ferrell’s improvs are smarter and funnier – meaning he has material that is inspiring him. 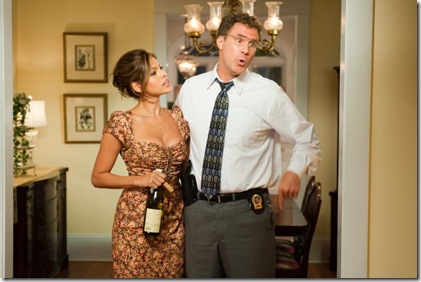 Wahlberg, though, is the revelation, here. Hoitz is as much a tough guy as any character he’s played, but he has a very weird human side: in high school he learned ballet, and how to play the harp, to taunt guys he refers to as “gay” – totally unaware of how that makes him look.

There’s also a running joke that is set off by Terry meeting Gamble’s wife, Dr. Sheila Gamble [Eva Mendes], whom Gamble refers to as “plain.” Although it’s as obvious as the nose on your face, it still works every time.

Then there’s the big case that sets Gamble and Hoitz on the road to, if not greatness, then competence. Gamble stumbles onto a construction project where no scaffolding permits have been filed. The owner of the project, billionaire investment guru David Ershon [Steve Coogan], is actually a Bernie Madoff clone, but it takes a while for The Other Guys to figure that one out. Even while they’re still on the scaffolding thing, though, the action ramps up and leads to another running gag involving Gamble’s firearm.

The idea that Gamble and Hoitz’s boss, Captain Gene Mauch [Michael Keaton] moonlights as a department manager at Bed, Bath & Beyond is only heightened by his name being one of a number of sports references – including the one that got Hoitz assigned as Gamble’s partner [I’m sure lots of reviewers will have spoiled that moment, but I won’t; it’s too funny – especially if you’re a Red Sox fan!].

As for action, the trailer doesn’t even begin to hint at the action sequences! Car chases – in a hybrid! Explosions [bigger than you’d expect] and even a beautifully shot homage to John Woo. Seriously, The Other Guys has the funniest action sequences I’ve seen in many years, and they work because it doesn’t matter whether they’re scaled down or over the top, they’re shot as completely real.

My only real problem with The Other Guys is that Ferrell does take a lot of gags a few beats too far, but given the strength of the material overall, that’s a small quibble.

Stick around for the spiffy closing credits, which will give you an instant education on the realities of financial crime while making you smile [a difficult trick, but beautifully done].

This is one of those smart movies built around stupid humor. With its mix of silliness and its willingness to take parody to new highs [and lows], The Other Guys kicks cinematic butt.

In short, The Other Guys’ idiosyncratic [freakshow] cops rule!

One thought on “The Other Guys: There’s a New Accountant in Town!”