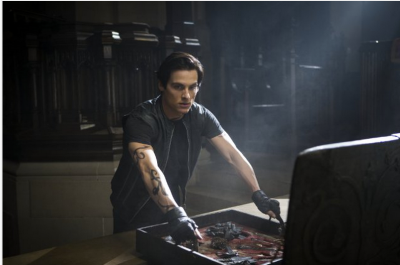 Kevin Zegers in The Mortal Instruments: City of Bones

EclipseMagazine.com launched 18 years ago, since then we’ve interviewed hundreds of people, but I never forgot our first victim – Kevin Zegers.  He was a young, up and coming 10 or 12 year old star at the time having appeared on an Episode of the X-Files and starring in Air Bud: Golden Retriever.  All of these years later, if the reception at San Diego Comic Con is any indication, his career is about to go to the next level with his star turn in The Mortal Instruments: City of Bones – which is being billed as the next Twilight Saga.

I recently had a chance to catch up with Kevin and thank him for being our first Interview, along for the conversation were his two co-stars: Lily Collins and Jamie Campbell Bower. In part 1 of this 3 part interview, we talk a bit about what it is like to know that they are getting ready to embark on a long 5 or 10 year Journey (assuming this becomes a huge franchise) and whether they fear typecasting. The Mortal Instruments: City of Bones opens everywhere August 21, 2013.

Of course, during the conference call, I had to thank Kevin for being the first victim and tell him it has been 18 years…

Question
Yeah, you were. It was almost 45 minutes.  I just want to ask all of you what is it like coming into a franchise like this?  What does it mean for your careers to know that you’re going to be set for another five or 10 years, but you have to be this character for a while?  Are you afraid of being typecast? 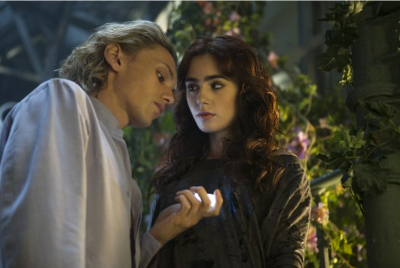 Lily Collins and Jamie Campbell Bower in The Mortal Instruments: City of Bones

L. Collins – Well, I think what’s interesting and what’s great for us in this film is that this isn’t our first film so we were able to do other projects before this one in order to kind of avoid any ability to be typecast.

I think our characters go on some many different experiences and journeys through the series of books that if we get to continue to do more than the two that are planned, then we get to show different sides of our personalities as the character, but also of our selves and I think it goes so many different places in this series that we’re able to experiment so much and have so many different opportunities. I signed on because I wanted to play Clary for as long as I was able to and I loved her and I loved what she stood for and I loved the world in which Cassandra wrote. So, it’s an honor to be able to continue to play Clary and to experience it with her.

K. Zegers – The same goes for me.  I’m grateful that I’ve been able to work on stuff before this.  I think it’s a little more difficult when you’re introduced to people as the one character.  People have never seen you in anything before and they sort of go, right, you’re Clary Fray from The Mortal Instruments, I’ve never seen you in anything, I have no association with you doing anything besides that.

I think all of us have ambitions outside just this one film, so I think the good news certainly for us, and we’ve spoken about it is, we love this story and the longer we get to be a part of this franchise of films is great.  It’s certainly great for our careers and great for all the stuff that comes along with that.

This is not intended to be the last thing that any of us do by any stretch of the mind.  We’re all young and ambitious and have many different things.  Jamie’s got his music and Lily and I have different sorts of films that we like to do.  This enables us to have so many options in terms of that and alongside being able to do these films that are a lot of fun and certainly a lot better than they need to be or people may even expect them to be.

I saw this film a couple of weeks ago and as a 28-year-old guy I was thoroughly impressed and I’m not in a lot of it, I’m not patting myself on the back at the beginning, but it’s a really great film and it’s not just about 14-year-old girls.  I went in and the two hours sort of flew by and I was looking forward to more.

J. Bower – I think what Kevin said is really important actually.  I just want to add to that.  What’s interesting and I think what’s great for all of us is we’ve all worked before.  This is, by no means, sort of the first job that any of us has come to, so this is, hopefully, not going to pigeonhole us in a way.  I could be totally wrong, but I think that was always something that I think subconsciously sort of led me to the not being concerned about this going on for five or six years.

Because it’s great that I get to go back and it’s great that we get to go back and work together as a team and I get to work with my best friends again.  When I was cast was that at the forefront of my mind?  No, because I’ve been in shows or I did movies where we thought it was going to be more and you always prepare yourself for a no; you just have to focus on the elements on the movie that you’re shooting at the time rather than if it’s going to last forever.  So, yeah.  How’s that?

Question
Would you guys say that the fantasy genre is something that really attracts you?  I mean, Jamie, I know, for example, you played a vampire in The Twilight Saga.

Studios need to make movies that they know people will go and see, so an adaptation of a book that has sold over however many, 22 million copies is a bankable bet, put it that way.  I’m just thankful and happy and proud that we made it so good because there have been adaptations that haven’t been anywhere near as good as this. So, when it comes to fantasy I just suppose everyone likes to be taken away from the mundane elements of life.

L. Collins – I personally have always loved fantasy.  That’s why, for me, playing snow white was such a big deal and I grew up loving Harry Potter and anything magical, but for me, this series was the one that popped out from those, at least I’m thankful that I got to be involved in it, but the idea that it is edgier and darker and bit sexier and is quite funny are elements that I didn’t really find in the other ones.  I definitely love to escape reality for a little while and if I get to be a part of that and then taking other people with me in that kind of journey, then that’s awesome to say that’s my job.