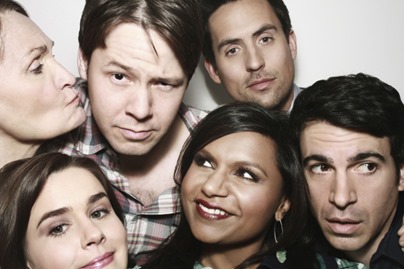 See the second season premiere of The Mindy Project online now. One lucky fashion-conscious fan will also win the opportunity to receive a $2000 makeover in the Fox/Mindy Makeover Sweepstakes. See the press release, after the jump, for details.

THE MINDY PROJECT is back early this season!  A full week in advance of its primetime debut, the second season premiere episode of THE MINDY PROJECT will be available for preview on FOX on Demand, FOX.com, FOX NOW and Hulu.com, as well as on major online distributors and connected devices. The preview will run for six days, beginning today, Tuesday, Sept. 10 through Monday, Sept. 16 at 12:00 AM ET.

In addition to FOX.com (www.fox.com), FOX NOW (www.fox.com/foxnow) and Hulu (www.Hulu.com), the episode will be available on FOX on Demand via participating cable and satellite distribution partners, such as Cablevision, Charter, Xfinity, Cox, Mediacom, Suddenlink, Time Warner Cable, AT&T U-Verse and Verizon FiOS. The season premiere episode also will be available on connected devices, including Xbox 360, Samsung, Windows 8 and Roku, along with major online distributors, such as iTunes, Amazon, Microsoft, Samsung, Vudu and YouTube.

As an added perk, FOX will give away a $2,000 styling budget to one lucky fan in the “FOX/THE MINDY MAKEOVER Sweepstakes,” beginning today, Tuesday, Sept. 10 and running through Wednesday, Sept. 18 at 11:59 AM PT. No purchase necessary to enter or win the FOX/THE MINDY MAKEOVER Sweepstakes.  Open to legal residents of the 48 contiguous U.S. & D.C., 18 and older. Other restrictions apply. Sweepstakes begins on 9/10/13 and ends on 9/18/13 at 11:59 a.m. PT. Void in AK, HI & where prohibited. Please visit www.fox.com/the-mindy-project for how to enter, additional details and Official Rules. Sponsor: Fox Broadcasting Company.

THE MINDY PROJECT is produced by 3 Arts Entertainment in association with Universal Television. The series is created and written by Mindy Kaling. Kaling, Howard Klein, Matt Warburton, Michael Spiller and Jack Burditt are executive producers. “Like” THE MINDY PROJECT on Facebook at Facebook.com/TheMindyProject. Follow the series on Twitter @MindyProjectFOX and join the discussion using #themindyproject. See photos and videos on Instagram at @mindyprojectfox.