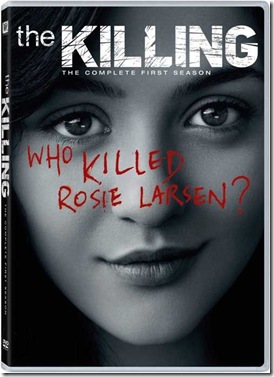 When Rosie Larsen [Katie Findlay] is found dead, in the truck of a submerged car, the investigation of her death prevents Sarah Linden [Mirielle Enos] from leaving Seattle to marry her boyfriend, Rick [Callum Keith Rennie] – much to the displeasure of her thirteen-year old son, Jack [Liam James]

Linden is asked to stick around by her boss, Lt. Michael Oakes [ Gary Chalk], because he wants her to shepherd the division’s newest detective, Stephen Holder [Joel Kinnaman], a blunt objects kind of guy – if it crosses his mind, he says it.

There is a wealth of suspects, ranging from a spoiled, drug-using rich kid, Jasper Ames [Richard Harmon] to a particularly supportive English teacher, Bennet Ahmed [Brandon Jay McLaren], to her parents [at least in the mind of Holder], Stan [Brent Sexton] and Mitch [Michelle Forbes], to a local mayoral candidate, Darren Richmond [Billy Campbell] and more.

The Killing, loosely based on Danish series Forbrydlesen, is pretty much the anti-procedural. Yes, everyone wants to know who killed Rosie Larsen, but the series exists as much to drawn fully-formed characters as solve a murder mystery.

One of its key ideas is that we actually see the impact of the death on the victim’s family. Mitch’s collapse, as dramatic as it is, is not nearly as powerful as Stan’s anguish for two reasons. First, while Forbes does a wonderful job, we are already aware of her range from a multitude of movies and TV series and Sexton, who is best known for somewhat lighter material [he was the comic relief on Life and Deadwood, for example], really nails Stan’s pain. Second, we are so used to male characters toughing it out [manning up, as the phrase goes], that seeing Stan in such pain is almost too powerful to bear.

Over the course of the first season [thirteen episodes, equaling thirteen days of the investigation], we get to know all the characters intimately. Linden’s fractious relationship with Jack [moms are not to cool to thirteen-year old sons]; the growing rapport and trust between polar opposites Linden and Holder; the cracks in Stan and Mitch’s marriage – all are explored in [sometimes] grim detail.

Powering through all thirteen episodes of season one, it also becomes clear that those seemingly less than wonderful episodes in mid-season are actually not really terrible. Indeed, they spend so much time on character stuff that the investigation seems forgotten – but only until it’s not. The investigation may not be in the foreground for much of this time, but that’s because it informs everything that is going on in the lives of the characters who have fallen into its range. These middle episodes are still better than average television – they only suffer in comparison to the episodes that bracket them.

The Killing also has a truly unique look. Whether it’s raining or not, the series always seems be damp, soggy, close. Even when we get beautiful shots of green areas or bodies of water, we still feel just the tiniest bit claustrophobic. The characters draw us more deeply into their lives and the setting enhances that.

Even as we’re drawn in, there are moments when it seems like Linden and Holder are not the brightest cops in the world. It can seem, at times, that they’re so busy knowing that someone is guilty that they lose track of finding some evidence to back them up.

When the season ends on its Jack ruby-esque cliffhanger, though, all else is forgotten. We may be frustrated, infuriated or intrigued, but we wouldn’t have any of those reactions if we hadn’t become deeply invested in the proceedings.

Grade: The Killing: Season One – B+