We’re entering the dog days of summer and the last of the summer blockbusters has opened (or maybe closed – it’s been that kind of summer). Into that void comes The Hitman’s Bodyguard – a movie that would be a B-movie if not for its high powered leads.

After his Triple-A rated protection agency goes ‘Pffft!’ following losing a client, Michael Bryce (the world’s top bodyguard) gets a major gig shepherding Darius Kincaid (the world’s top hitman) to the World Court in The Hague. Things do not go smoothly.

Our story begins with Bryce (Ryan Reynolds) escorting his charge safely to a private jet on a closed runway. The guy is in the plane when a shot cracks through the port and kills him.

Meanwhile, Kincaid (Samuel L. Jackson) is agreeing to testify against Vladislav Dukhovich (Gary Oldman), a Belarusian dictator in return for his wife’s release from prison. 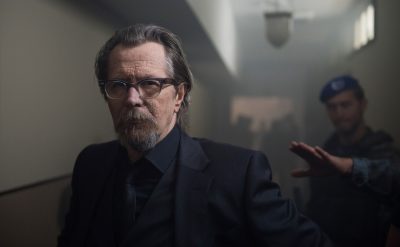 We see Bryce doing his job at much lower level of client and see just how good he is at it, while Kincaid is being taken to a plane to head for The Hague – escorted by an Interpol team headed by Amelia Roussel (Elodie Yung).

While Bryce gets the job done, Kincaid’s travels are interrupted by a horde of Belarusians. Only he and Roussel survive and they head to a nearby safe house – from whence she calls Bryce to take care of Kincaid.

Thing is, Bryce thinks Amelia sold him out on the gig that crashed his career and is not happy. She has to promise to restore his prized (and much lamented – at length) Triple-A Rating.

Another thing is that Kincaid has tried to kill Bryce 27… no, 28 times! 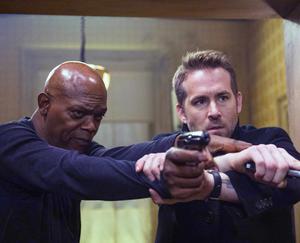 Once Bryce accepts the gig, the rest of the film mostly follows this mismatched team – which is not a bad thing because Reynolds and Jackson have terrific chemistry and are clearly enjoying themselves.

Another highlight is Salma Hayek as Kincaid’s wife, Sonia. She’s rude, crude, awesome in a fight (the story of how they met is delightful whacked) and devastatingly gorgeous. She owns the screen in her brief appearances.

Aside from not having to figure out the mole in Interpol (it’s exactly who you will think it is – and the film makes it clear very early), The Hitman’s Bodyguard is not the brightest bulb on the cinematic chandelier. 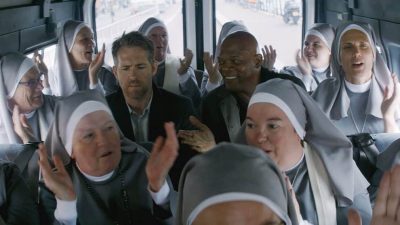 It’s about fifteen minutes too long; the plausibility of the reason for the deadline by which Kincaid needs to reach the World Court is suspect at best, and, somehow, Dukhovich has more minions that Gru – and they’re all well-armed (and terrible shots). (At least not all the best jokes were crammed into the trailers!)

Writer Tom O’Connor (Fire With Fire) probably should have taken one pass at the script, but director Patrick Hughes (The Expendables 3) manages to keep things moving well enough – and with enough inventive chase sequences, fights and shoot-outs – that it’s pretty easy to suspend one’s sense of disbelief and just go along for the ride.

At least until the 105-minute mark – when things begin to feel a bit wearying.

In terms of goofy summer fun/dumb summer fun, The Hitman’s Bodyguard slides into that niche quite comfortably. It’s not great, but it’s stupid fun. Sometimes, on a hot late summer day, that’s all you need.