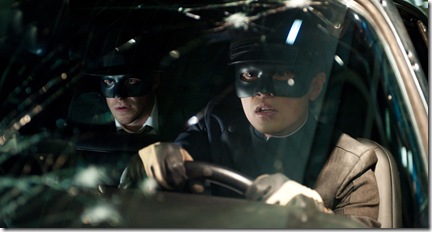 The closing credits list the 1930s radio plays as the source for Seth Rogen and Michel Gondry’s adaptation of The Green Hornet but the movie looks and feels like an update of the 60s TV series played as if it were adapted by Judd Apatow. It’s a mess – but it’s an often entertaining mess.

Britt Reid [Seth Rogen] is the only child of newspaper magnate James Reid [Tom Wilkinson], but he has none of his father’s drive- possibly because, as a kid, whenever he tried to do the right thing all it got him was a lecture and the destruction of a favorite action figure. To say that Britt has daddy issues would be an understatement.

When his father dies of an allergic reaction to a bee sting, Britt inherits his business empire and, after a bit of self-centered wallowing, compounded by a really terrible cup of coffee, he starts to think. First, he thinks, he needs to find the person who made the amazing cup of coffee he used to enjoy. Then, upon meeting the coffeemaker, Kato [Jay Chou] and discovering what an inventive genius he is, he has a second thought. They should become crimefighters – but they should pose as bad guys so they can get close to the real bad guys! The only thing is, they have no idea how to do that – even after Kato whips up a tricked out supercar, Black Beauty/

.Enter Lenore Case [Cameron Diaz], gorgeous temp whom Britt first alienates, then hires, then hits on [unsuccessfully] before discovering that she really knows her criminology. By picking her brains, he and Kato – now the Green Hornet and [partner-name-to-come-later] – set about kicking crime’s ass and ticking off Palm city’s crimelord, Chudnofsky [Christoph Waltz]. All of which leads to the expected showdown. In the meantime, the Daily Sentinel is being run by Mike Axford [Edward James Olmos], who was James Reid’s number one, and who comes out of a different movie entirely.

There are lots of action sequences in The Green Hornet and they are where the movie’s fun really erupts – largely due to what’s being called ‘Kato-vision,’ a clever CG effect from Kato’s point-of-view that marks opponents and their weapons. Jay Chou’s martial arts moves are also fun – and there’s a moment when Kato leaps over a car that seems to telescope out until there are four of him jumping four cars – an effect that was achieved in camera.

A lot of the film’s laughs come from just how inept Britt is, even once he decides to do more with his life. Even with all kinds of good intentions, he’s still a bit of a dick – which leads to a problem with Kato that’s solved in precisely the manner such things are worked out in comics. To wit, they fight. The cliché works, though, because it’s been well set up.

It’s kind of cool that, even once he decides to do something with his life, Britt remains a jerk. It takes more than good intentions to finally get him on the right track, for real. One of the things that sets him straight is that Palm City’s D.A., a very Nordic-looking guy named Scanlon [David Harbor] may not be the bastion of Good and Light that he appears to be. Harbour is very smooth – and just a bit oily – as Scanlon.

Olmos and Diaz are, however, pretty much wasted here. Olmos plays Axford like someone from The Front Page and Diaz’s role could have been played, as well or better, by any number of less expensive actors – to no ill effect on the movie.

The Green Hornet flip-flops between Apatow-like humor, camp and serious action-adventure. Rogen describes it as an action-comedy, but it’s both more and less than that. In places, it’s more serious than I expected, but mostly it can’t quite decide whether to go all out campy, or pull back just enough to be a solid action-adventure. That identity crisis is enough to keep the film from any real feeling of coherence. Gondry does what he can, but it’s pretty clear he didn’t have final cut – there’s too much goofiness for the action to overcome.

Another waste is the 3D – except for one or two moments, and the closing credits, it’s barely noticeable. I don’t understand why it was necessary for The Green Hornet to be converted from 2D – it adds nothing to the experience.

Overall, then, The Green Hornet is a fun ride if you can get past the highly variable tone and ineffective 3D conversion.