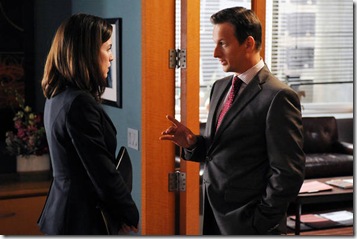 The next morning, while working on a settlement, Alicia is dragooned by Judge Howard Matchick [Chris Sarandon] to supervise a defendant in a murder case who has elected to represent himself. Following which, she returns to the office to find new partner Derrick Bond [Michael Ealy] giving a bit of a speech. His firm has just merged with hers!

Between Alicia’s problems caused by taking on a trial with no warning or lead time; the swak of ideas that Bond has proposed for the newly merged company [no window offices for partners; official mentor programs, and more]; the problems that a new sex scandal may be causing for Peter’s campaign, and an unexpected problem for the firm’s prime investigator, Kalinda Sharma [Archie Punjabi], there are enough arcs here to survive a flood of epic proportions.

Written by Ted Humphrey and directed by Felix Alcala, Taking Control is a shining example of why The Good Wife drew so many Emmy Award nominations. The writing is crisp when it needs to be, melodramatic when it needs to be and leavened with just enough humor [especially in the Kalinda arc] to keep things from being predictable. It’s the change-ups that elevate what is, in essence just another legal drama, above the rest of the field.

Both Emmy nominee Margulies and Emmy winner Punjabi are in top form here and the rest of the cast [especially Ealy and Charles] marches them note for note. Ealy, especially, impresses with an easy charm as the new member of the firm at the senior partner level, and Charles, who hasn’t had such a meaty role since Sports Night, is definitely at the top of his game, too.

Taking Control serves notice that The Good Wife is ready to dispel any thought of a sophomore jinx. The season is off to a running start. Members of the Academy, please take note.