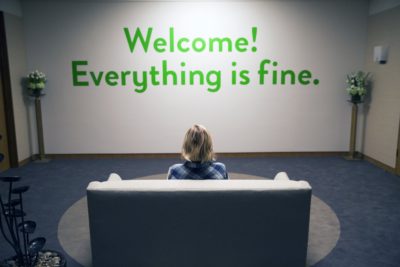 Eleanor (Kristen Bell, House of Lies, Veronica Mars) finds herself in The Good Place where she is welcomed by the architect of her new neighborhood, Michael (Ted Danson). He explains how The good Place isn’t exactly Heaven (pretty much every religion got it 5% right – a stoner from Calgary got really high and got it 92% right), but generally it is the place where the very best people go when they die.

There’s even a soulmate for everyone in The Good Place – hers is Senegalese professor of ethics called Chidi (William Jackson Harper, Paterson) or he would be if she was the Eleanor Shellstrop that Michael thought she was. 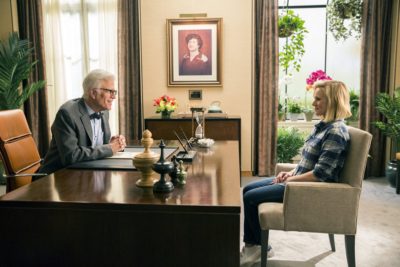 Unfortunately, Michael doesn’t know he’s made a terrible mistake and weird things (chaotic things) begin happening – but Eleanor and Chidi know. If she doesn’t do something quickly – like become good/unselfish – she could wind up in The Bad Place (we’re given an audio sample of what that’s like and, as Eleanor notes, ‘It does not sound awesome!’).

When I screened the pilot earlier, I quite enjoyed it though I did wonder if it could hold up for an extended series. The premiere is actually two episodes, so that gives an indication that it might well work out.

Michael’s neighborhood has a few quirks – like there’s a lot of frozen yogurt stands (but he says that’s the one thing all of neighborhoods in The Good Place have) – and the inhabitants of the neighborhood (with the exception of Eleanor) deserve to be there. Another quirk is that there’s no swearing (well, fork that!) – a quirk that could easily be run into the ground but seems to be eased off in the second half of the premiere (thank Goodness!).

Then there’s Janet (D’Arcy Carden, Broad City) – the cheerful data construct that provides information (and that terrifying soundbite). She tends to be a bit literal, like an android with a happiness chip, and adds the occasional bit of fun. 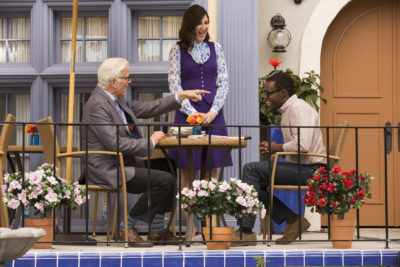 Eleanor’s neighbors Tahini (Jameela Jamil, Playing it Straight) and her soulmate Jiyang (Manny Jacinto, The Romeo Section) are prime examples – she helped clear mines away from a school in Asia; he’s a Buddhist monk who maintains his vow of silence even after death. (Eleanor’s sure Tahini puts on her English accent – and envies her much bigger home).

The series premiere is well written and both Bell and Danson deliver on every bit and every nuance. 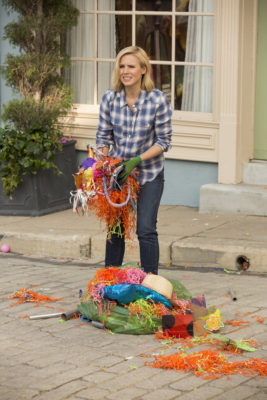 Once the premise is established, we start to delve into the characters a bit (but not too much) and yes, there is the tiniest bit of evolution for Eleanor in the second half (entitled Flying).

Danson has a lot of fun as Michael – obsessing over every little detail of his creation and falling apart when it seems he may have included some design flaws. When he and Bell are in the same scene, their timing and chemistry are exceptional.

The Good Place is as offbeat as you’d expect from the guy who gave us Parks and Recreation and Brooklyn Nine-Nine – and as good. The question now is whether it’s going to hold an audience that is used to less eccentric comedies.