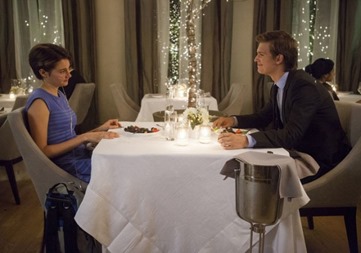 The surprise box office hit of the summer, The Fault In Our Stars will be released in a Blu-Ray/DVD Combo Pack on September 16th. The Fault in Our Stars: The Infinities Edition includes two versions of the film – the theatrical cut and an extended edition, with commentary tracks for both.

The Blu-Ray also includes six deleted scenes (with optional commentary); The Stars Align (Book to Screen); Promotional Featurettes: The Cast, The Making of The Fault in Our Stars, The Transformation, Literature to Life, Our Little Infinity, The Music Behind Our Stars, and a Photo Gallery.

The DVD release includes an Audio Commentary for the Theatrical Cut, the six Promotional Featurettes and the Photo Gallery. For more, check out the press release following the jump.

THIS SEPTEMBER BRING HOME THE GLOBAL PHENOMENON THAT CAPTIVATED THE HEARTS OF MILLIONS!

Die-Hard Fans Must Get the Little Infinities Edition Blu-ray™ to
See the Extended Version of Augustus and Hazel’s Story and get an exclusive, limited-time-only Infinity Bracelet!

LOS ANGELES, Calif. (July 22, 2014) – Twentieth Century Fox Home Entertainment brings you “a beautiful, poignant, funny and heart-warming film” (Chicago Sun Times) on September 16, when THE FAULT IN OUR STARS arrives on Blu-ray™ and DVD with an extended version of the movie! Featuring brilliant performances from Shailene Woodley and Ansel Elgort that made the film a favorite of fans and critics alike, this inspirational modern day tale of star-crossed lovers will have you going from laughter to tears and back again. Fans of the book and the film showed up in droves to theaters across the globe to share little infinities with their beloved characters, driving nearly $240M in box office sales worldwide!

Hazel (Shailene Woodley) and Gus (Ansel Elgort) share a sarcastic sense of humor, a distaste for the conventional, and ultimately a love that sweeps them on an unforgettable journey. Although the two teens face unlikely challenges, their courage and dedication to each other prove that while life isn’t perfect, love can still be extraordinary. Laura Dern (Little Fockers) and Sam Trammell (TV’s True Blood) also star in this powerfully moving film based on John Green’s New York Times best-selling novel.

THE FAULT IN OUR STARS comes to Blu-ray™ and DVD with an extended version that will keep Augustus and Hazel’s beautiful infinity going even longer and have the millions of lovers of the film and book holding on to every last second. Die-hard fans of the film must get their hands on the Blu-ray™, which is the only place to find a behind-the-scenes look at how the two lover’s paths aligned in bringing the book to the screen and six deleted scenes to complete the inspirational tale.

?
The Stars Align: Book to Screen

?
Plus all of the features on the DVD!

THE FAULT IN OUR STARS Blu-ray™ SPECIAL FEATURES

?
The Stars Align: Book to Screen

?
Plus all of the features on the DVD!

THE FAULT IN OUR STARS DVD SPECIAL FEATURES

?
Promotional Featurettes: The Cast, The Making of The Fault in Our Stars, The Transformation, Literature to Life, Our Little Infinity, The Music Behind Our Stars