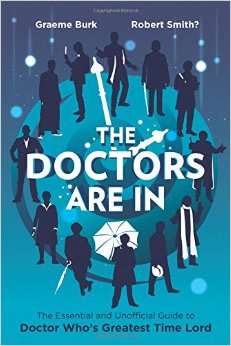 Two whole-hearted Whovians wrote The Doctors Are In – an examination of each of the twelve Doctors (and a Warrior) to date. The writing is smooth and balances nicely between scholarly and chums chatting.

Graeme Burk & Robert Smith? have worked together on previous books of the type and frequently refer back to them – a bit of a sticking point (and a bit annoying) for anyone who hasn’t read their previous titles.

The Doctors Are In is an examination of the Doctor in all his incarnations. Burk & Smith? set up each section (Tom Baker gets two for providing us with 7 seasons) and give their assessments of the Doctors and their Top Companion – plus a brief look at the actors who played them.

What’s the most fun about The Doctors Are In is that Burk and Smith? don’t agree one hundred per cent of the time – and have no qualms about letting that be known.

The tone of their writing falls somewhere between pure fanboy and pure researcher. The result is a lot of fun to read – especially when they feel the need to play with the format (Burk writing an acrostic to explain his love for the Fifth Doctor’s adventure, Castrovalva, Smith’s essay on Tom Baker’s serial The Ark in Space (where Burk write a straightforward essay, Burk writes an essay for The Ark, an early William Hartnell serial that has a very similar plot).

The gist of the book is that it examines the Doctor’s character in each of his incarnations and sets the two different eras – Classic and Modern – as being performance driven (based as much on the actors as the characters they played) in the Classic Series, and character driven (each Doctor’s character has a very real actor to which the actor then brings his unique perspective) in the Modern Series.

It’s an interesting theory and, of course, there are times when each era has played to the noted strengths of the other – making for some very interesting debates by the authors.

The result is a fun book that imparts a great deal of knowledge and some well-defended opinions. Devoted Whovians may agree or not, but the fun is of the book is that it doesn’t matter – the book is, at least in part, a debate as well as an agreement.

The authors seem to be clear on the concept of differing opinions and will no doubt count it as much a success if readers disagree about some of their assessments – as long as they agree about Doctor Who, and the Doctor, being a unique and delightful entity unlike anything else on television.

If you like Doctor Who, this is well worth picking up.