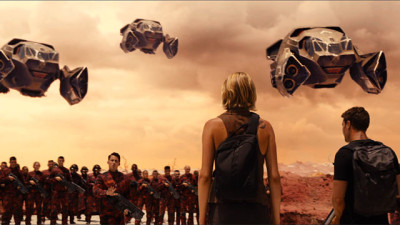 I enjoyed the first two movies in the Divergent series – enough to give them both a B grade. The characters were riffs on ones we’d seen before, but Shailene Woodley and Theo James brought substantially more to them than the scripts might have indicated.

Now comes Allegiant – third in the series and part one of the two-part elongation of the third book in the YA trilogy. Although it introduces a new villain – and suggests that, like in The Hunger Games: Mockingbird Part 2, a once apparently decent character gives in to the temptation of power – the whole thing feels like it never really goes anywhere.

As Allegiant opens, Tris (Woodley) and Four (James) find themselves once more locked behind the wall in Chicago. Four’s mother, the Factionless leader Evelyn (Naomi Watts), has ordered them to stay – ignoring the invitation by the outsiders that capped the second film for safety and security reasons. Oh, and, now the leader of Chicago (in theory), Evelyn incites mob justice that results in leaders of Candor being executed before a screaming crowd. 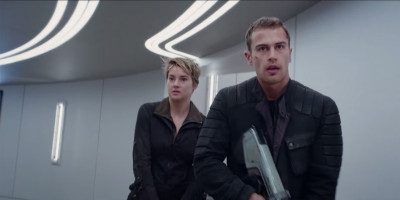 After a nasty experience in the outside – which looks like the result of a nuke-and-chemical war – the first four are found by a pick-up crew from the Bureau of Genetic Welfare and taken to its headquarters – Chicago’s O’Hare Airport (‘What’s an airport,’ inquires one of them).

There they are met by a crowd of adoring fans (they’ve been watched the whole time by the Bureau). Tris is asked to meet the Bureau’s head, Daniel (Jeff Daniels) and he fills her head with ideas like she’s the only one who can help save the human race. Four is leery (give that guy a bubblegum cigar!), but Tris won’t have it.

Meanwhile back in Chicago, Evelyn and Johanna (Octavia Spencer), who leads the former Amity, are about to start a war.

After a couple hours of the far too unnaturally manufactured splitting of our heroes – and a number of slickly produced action set pieces (is that a bubble ship from Oblivion?) – we wind up pretty much where we began.

Directed by Robert Schwentke and written by Noah Oppenheim, Adam Cooper and Bill Collage, the best thing that can be said about Allegiant is that it looks great (kudos to cinematographer Florian Ballhaus and the VFX people). 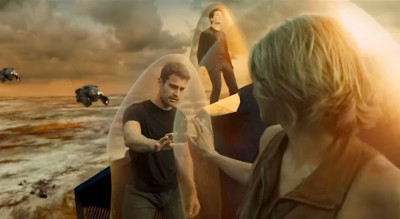 Unfortunately, expanding the story from three books into four films has taken its toll. Tris is the only character who has anything even remotely resembling an arc, and Four is now just The Boyfriend (albeit, The Boyfriend with a gun). Caleb is more boring than ever and Christina is so poorly used that she’s barely even set dressing.

If not for several decent quips from Peter (something Teller knocks out of the park every time), Allegiant would be pretty much lifeless – even with a subplot that involves stealing children from their families.

Daniels gets a few juicy moments, but they’re mostly juicy moments we’ve seen a million times before – the mild mannered, persuasive guy who, when things go wrong for him bugs his eyes out, waves his arms in the air and screams ‘NOOOOOOOOOOOOOOO!’ Been there, done that. Burned the t-shirt.

Interesting notes: 1) for the first time this year, the theater was nowhere near full; 2) the crowd seemed pretty listless, and 3) I finished my drink with more than twenty minutes left. Add it all together and you get a big honkin’ yawn!