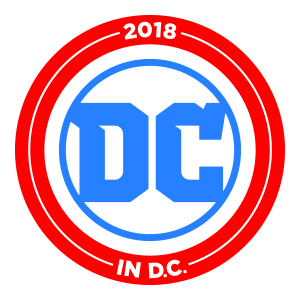 I’m pretty excited! The DC Universe is coming together for a special fan event in Washington, DC. This inaugural event will bring the world of DC TV Shows, Comic Books and Animation together in one pop cultural event. Mr. DCTV himself – Greg Berlanti and folks from all of his shows – Arrow, The Flash, Black Lightning, and Legends of Tomorrow will be on hand. From comics we have Geoff Johns and Batman’s Tim  Kring and others. Batman: Gotham by Gaslight will have a world premiere showing Friday the 11th and the cast of The CW’s new series Black Lightning will have a premiere screening Sat the 12th.  This WB’s stab at doing it’s own version of Disney’s D23.   The full release is below, check out the website for a schedule.

During the Martin Luther King, Jr. holiday weekend, Warner Bros. Television Group, DC Entertainment and Warner Bros. Home Entertainment will team up for “DC in D.C.,” a landmark pop culture event that brings together the worlds of entertainment and public service to illuminate the story of America and current issues through the lens of comics and Super Heroes. Events will take place Friday, January 12, and Saturday, January 13, 2018, at the Newseum, and will culminate with the world premiere screening of the upcoming DC series Black Lightning — based on the first African-American DC Super Hero to have his own stand-alone comic title — in the Warner Bros. Theater at the Smithsonian’s National Museum of American History, with a party to follow at the National Museum of African American History and Culture.

“DC in D.C.” brings together stars and producers from Warner Bros. Television’s DCTV series, as well as comic book writers and artists from DC Entertainment, who will join invited guests from politics, government service, entertainment, business, academia and more. The event will explore the intersection of comic books, culture, entertainment and enlightenment through a series of panel discussions open to the public. Additionally, “DC in D.C.” will present the premiere screening of the DC Universe animated movie Batman: Gotham By Gaslight (for ages 18+) at the Newseum.