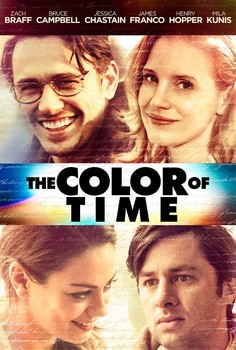 The Color of Time was made by the members of a class James Franco taught at NYU – a peculiar mix of poetry and biography based on the poems by Pulitzer Prize winner C.K. Williams. The film’s content is a collection of vignettes composed of memories, poetry and Williams’ struggle to write new material as he prepares for an appearance to read his work.

The reason I say that The Color of Time feels like a student film is not because of any lack of polish, but because it looks and feels free of the need to be commercial; to fit into a specific niche. Franco’s students have clearly been taught well when it comes to both technique and thinking for themselves.

Franco plays the poet in what is the film’s ‘present’ as he tries to prepare for an engagement to read his work. His wife (Mila Kunis) seems generally understanding and supportive but really doesn’t have much to do.

At various times, we see the younger Williams with his mother (Jessica Chastain); with Sarah (Mia Serafino), clearly his first crush; visiting a black prostitute with a friend; getting high at a party; working on a ranch looking after horses when a friend (Zach Braff) comes to visit.

Each vignette comes along in chronological order, for the most part – though there echoes of some of them in brief flashes later – and together, they seem to be more like idealized versions of moments of inspiration that have led Williams to become a poet. In a way, they are interpretations of inspirations by members of Franco’s film class.

Love, lust, friendship – all are themes that seem to inspire Williams’ work. They are certainly the base on which The Color of Time is built.

It should be noted that Franco neither wrote nor directed any part of the film – he isn’t even the only actor to play Williams. I expect his role as producer was to persuade the bigger names in the cast (Chastain, Kunis, Braff, Bruce Campbell) to take cameos in it.

Overall, The Color of Time works reasonably well. Though it’s the product of a dozen writer-directors, it feels of a piece thanks to superb editing and an understated, unifying score.

As a whole, though, The Color of Time doesn’t quite feel like it’s greater than the sum of its many parts. It is fascinating, though, and well worth a look even if, like me, you’ve never read C.K. Williams.

The Color of Time is a bare bones video – there are no features – probably more because the number of writer-directors who made it impractical than any other reason.