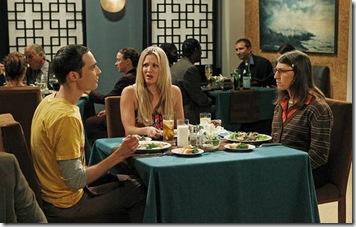 For three seasons, whenever I’ve tried to watch an episode of The Big Bang Theory [CBS, Mondays, 8/7C], I’ve found it predictable and remarkably unfunny. I’ve even tried episodes that guest-starred the inimitable Christine Baranski. Nothing.

So, I get the advance screener for the fourth season premiere and, dutifully, I sit down to watch – and it happens… I laugh. A lot!

The teaser opens with Howard [Simon Helberg] demonstrating a robot hand he’s devised as the next big step in technology for use aboard space shuttles – essentially turning the hand into a waiter. It’s actually funny, thanks, in part, to the obvious gag being so perfectly executed and then extended to an unexpected bit with Penny [Kaley Cuoco].

This sets the stage for the two arcs of the week: Howard finding an intriguing new use for the hand [let’s just say that the episode is entitled The Robotic Manipulation and leave it at that], and Sheldon [Jim Parsons] going on his first official date [Penny has to drive him…] – with one Amy Fowler [Mayim Bialik], a neurobiologist who is pretty much the female version of Sheldon. Leonard [Jonny Galecki] and Rajesh [Kunal Nayyar] are reduced to dispensers of the occasional witticism, but do add a bit of extra zing whenever they get their moments.

Very little in this ep is unfunny [which scared me, just a little], but some of the best riffs involve Sheldon using math figuring out how many men Penny has dated – and how many she’s slept with [all based on clues he’s seen personally…]. Parsons makes the most of the material he’s given and the result is spectacular. What’s even more impressive is the way Bialik matches him. Since we are going to be seeing more of Amy, I’ll actually be watching to see what happens next.

I’m sure that the series has always had a veneer of intelligence, what with the four male characters being geniuses and all, but The Robotic Manipulation is smart, sharp and funny in ways that I found unexpected. There’s a kind of verbal slapstick going on that counterpoints the moments of physical slapstick – and both are coupled with the kind of set-up/punchline gags that only work if they arise organically from the combination of genuine character and situation.

All is forgiven TBBT. You win.