Entertainment News for The Rest of Us
Sheldon Wiebe
Sci-Fi Channel, Television

Josh Gates’ Destination: Truth opens its second season [Sci Fi, Wednesdays, 10/9C] by tackling two intriguing situations. First, Gates and his crew [pictured] travel to Queensland, Australia to investigate sightings of a creature called the Yowle [yow-lee] – a creature whose description is familiar to many different cultures, which have given the creature names like Sasquatch, Bigfoot and/or Yeti. The second investigation in the second season premiere concerns a haunted mosque in Malaysia. 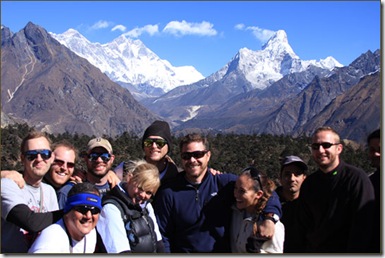 In each case, Gates and his crew follow their tried and true protocol: journeying to the sight of their subjects; setting up their equipment, and then waiting and watching for something to happen.

On paper that sounds pretty dull, but when members of Gates’ team encounter stuff that shouldn’t be there – like the shredded trees in Queensland, or hear sounds that have no visible source in the Malaysian mosque – it does give the viewer a bit of a jolt.

Unfortunately, the screener Sci Fi sent out was a rough cut that didn’t have the final portion of the episode – the part where they got the results of their collected evidence, so I can’t really say how things play out [not that I’d give spoilers, though knowing the results might have slanted my review differently]. The documentary style of shooting does have the effect of drawing the viewer into this world, though.

While I’m not exactly a fan of reality TV, the two case studies offered here present a certain amount of potential evidence of the existence of something that may not be from the realm of current scientific thought, and it would be interesting to see whether that evidence did support the existence of the Yowle, or the Malaysian mosque ghost.