Ghost Hunters [Sci Fi, Wednesdays, 9/8C] returns with a genuinely unusual investigation. Jason Hawes and Grant Wilson, and their team, TAPS [The Atlantic Paranormal Society, pictured], are asked to investigate Buffalo’s Iron Island Museum [so-called because it’s part of the neighborhood that surrounded on all sides by railroad tracks]. The museum was originally a church, and then for a number of years, it was a funeral home. 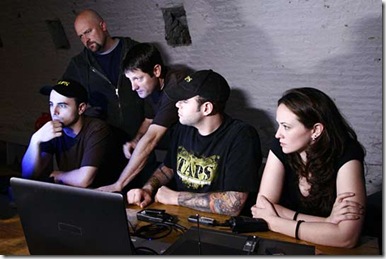 Employees and visitors to the museum have reported hearing banging noises, seeing apparitions and – in the case of employees – finding locked doors unlocked. One museum employee suspects that the ghost of a young boy named Jimmy is a part of the haunting.

Once the team sets up their cameras and other equipment, they then search through the building for unusual occurrences. And there are unusual occurrences! Even the team’s newest member, Kris Williams, sees something. It’s her first such experience, so even while there’s stuff going on, the rest of the team is happy for her – and she is just thrilled, herself!

One of the things that makes Ghost Hunters work is that the guys aren’t deadly serious. Their sense of humor is infectious and helps keep the team relaxed and alert. In this case, when one member of the team hasn’t seen or heard anything, they give him permission to be, shall we say, less than polite? Another thing that adds to the show’s atmosphere is the manner in which some segments are shot in grainy black & white, evoking The Blair Witch. Between the humor and the suspense, the show certainly manages to enthral.

Iron Island is a good episode for opening the new season. There’s audio and video evidence that makes one’s spine tingle just a bit, and the team is still having fun checking for things that go bump in the night.