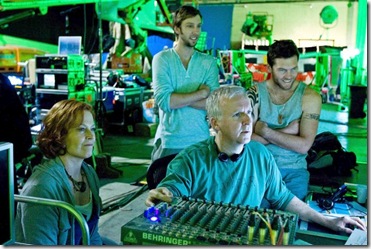 Friday evening [7:30/6:30C], Fox Movie Channel will premiere a half-hour special AVATAR: Creating the World of Pandora. With James Cameron’s colossal [literally] film poised to equal or best Titanic’s box office, perhaps now is the perfect time to take a look at what was required to create an entire world, from the ground up, in 3D.

The special looks at the film from day one of filming and not only explains the technological changes required to make the film, but actually lets us see the resulting equipment in action. It’s something special to watch Cameron shoot a scene with his virtual camera. As we watch the actors performing in what amounts to an empty room, the documentary camera comes around behind Cameron and, in the virtual camera, we see the film’s characters on Pandora.

Other innovations, like the expansion of motion capture to genuine performance capture – and a camera that shoots 2 & 3D simultaneously, are also explored – and we get to see how they were used to create Pandora’s unique environment. Members of the cast and crew talk about working on the film as well, and it doesn’t take long for us to feel their sense of wonder at what is being created around them.

Considering its brevity [a half-hour after commercials yields about twenty-three minutes of actual footage], AVATAR: Creating the World of Pandora is far more in-depth than you might expect – and it’s pretty entertaining, to boot.