Tomorrow night NBC’s Chuck [9/8C] returns with two slam-bang episodes – before sliding into its regular timeslot Monday night [8/7C]. Now we get to see if all those Subway sandwiches we ate were worth it! 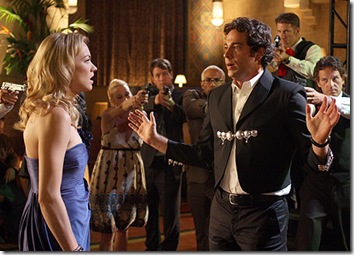 First up, Chuck vs. The Pink Slip deals with Chuck’s inability to access the Intersect 2.0 at will because he is inconsistent at keeping his emotions in check, resulting in his getting fired and slipping into a cheese ball hazed slacker stupor. The following ep, Chuck vs. The Three Words, brings back Carina [Mini Anden] who’s gotten herself engaged to arms dealer Karl [Vinnie Jones]. Monday brings us Chuck vs. The Angel of Death, in which Chuck saves the life of the dictator of a Cuba-like country who wants to bring democratic reform to his country. Plus more fun at the Buy More.

Ever since season one, Chuck [Zachary Levi] has taken a journey from being a guy who “screams like a little girl” [to use Levi’s words], to becoming able to face the trials of being gifted/cursed with the Intersect, the device that contains every scrap of intelligence ever gathered by American intelligence services, and being able to use it with some degree of confidence – all while falling in love with his CIA handler, Sarah [Yvonne Strahovski] and putting up with the crusty Col. Jon Casey [Adam Baldwin], the NSA’s counterpoint to Sarah. All this, while maintaining his job as the head of the Nerd Herd kiosk in the local Buy More.

This season, Chuck is able, thanks to the Intersect 2.0, to gain abilities like kung fu, playing flamenco guitar and performing surgery. The problem [and the season’s biggest inconsistency – I’ll get to that a little a later] is that the Intersect 2.0 was created to be used by an agent who could control his emotions – someone like Chuck’s old university roommate-turned-spy, Bryce Larkin – and because of Chuck’s love for Sarah, his emotions frequently block his access to the Intersect 2.0. Hence his getting pink slipped by the agency.

Because NBC is so amped up by the quality of Chuck’s new eps, they sent reviewers give eps to give them a feel for the season. They were right to do so: the new season rocks!

There’s so much going on, and it all works so well, that it would be a shame if the show couldn’t at least maintain last year’s ratings and maybe pick up a bit. 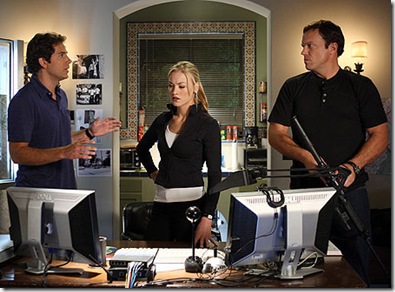 Some highlights: a Fight Club parody at the Buy More; potential new love interests for chuck and Sarah; Casey getting more responsibility at the Buy More; Chuck fighting Stone Cold Steve Austin on an airplane; fencing [!]; Paris; the return of Big Mike under the most bizarre of circumstances; cat burglar Chuck; Captain Awesome gets his chance to be a spy [and it’s not all he expects to be!]; Awesome and Ellie move into their own place across the courtyard; someone at the Buy More gets fired, and Chuck and Morgan become roommates [can you guess how that’s going to work out?].

And that’s not nearly everything from just the first five eps!

Now for that fly in the ointment to which I alluded earlier: the problem with the Intersect 2.0. As all chuck fans will recall, in the final scenes of the second season finale, Chuck accessed the Intersect 2.0 to save the lives of Sarah and Casey [and, not coincidentally, himself]. He did not do that by holding his emotions in check – rather, he was totally freaked at the thought of the woman he loved being killed! He accessed the Intersect 2.0 precisely because he was emotionally involved and panicking!

Now he has problems accessing the thing when he’s not in control. This is an inconsistency. A big one. One I hope won’t be allowed to subvert the whole season.

Because, if the five eps I screened are any indication, season three of Chuck is smarter, faster-paced, more thoughtful and more invested in its characters than it has ever been. The action sequences are better – and cooler; the relationships more involving; chuck’s new abilities, however sporadic and difficult to come by, are a source of much delight, and overall, the show is just more entertaining than it’s ever been.