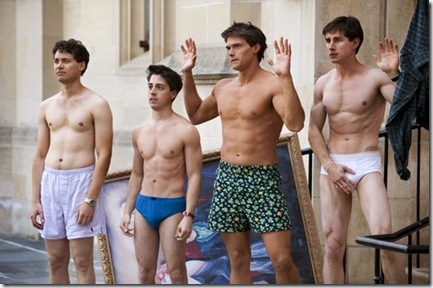 To the sounds of Talking Heads, Joel [Kelly Blatz] endures the final leg of his journey to independence – college, that is – in the family station wagon as his dad [Brad Garrett] attempts to impart some fractured wisdom; Eli [Matt Bush] practices his dance moves – in his underwear – to an embarrassing finale; Brian [Hartley Sawyer] suffers through a weird pep talk from the baseball team’s manager, and preppie Jason [Drew Seeley] shows his finessed single room to his ‘single’ room. It’s 1986 and these four freshmen are about to enter their Glory Daze [TBS, Tuesdays, 10/9C].

END_OF_DOCUMENT_TOKEN_TO_BE_REPLACED 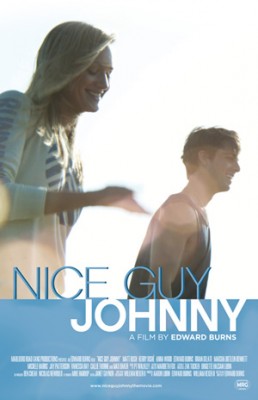 In preparation for Ed Burns new indie film “Nice Guy Johnny” we are giving away some cool stuff (autographed script, poster, music)! Johnny Rizzo (Matt Bush) is a fledgling sports talk-radio host looking to make a higher-paying career change to appease his fiancée Claire (Anna Wood). Johnny heads home for the weekend to New York for a job interview set up by his future father-in-law and runs into his skirt chasing, bartender uncle Terry (Ed Burns). Terry makes it clear that he thinks Johnny is crazy for getting married and settling down at such a young age and decides a trip to the Hamptons for a freewheeling weekend is just what his nephew needs to put a little perspective on things.

“Nice Guy Johnny” is the latest of Burns trademark indie flicks but with a twitst…it’s opening in theaters, on iTunes, DVD and VOD all on October 26th. That’s right, all forms of media all on the same day! Talk about being resourceful and innovative. Ed has opted out of the big studio machine to try and reach his audiences in a more creative way. People like to view their entertainment in different ways, so why limit their options? While Burns isn’t the first to debut a film in more than one format at the same time, he is definitely one of the few. I think this is a great idea and hope that more filmmakers follow his lead!

Contest details below the jump.