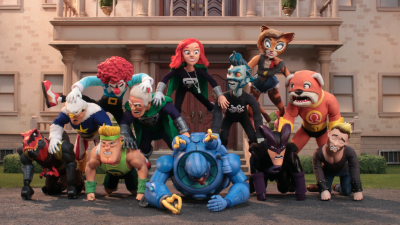 The third season of the satirical superhero series Supermansion is now streaming on Crackle.

In season three of “SuperMansion,” the lunatics get the keys to the asylum when Dr. Devizo (Chris Pine) is declared a hero after “saving the world” at the end of last season.

Season three of Sony Crackle’s Emmy-nominated stop-motion animated adult comedy series, “SuperMansion,” is now available to stream for free starting today, Monday, May 7, with new episodes added weekly. In the premiere episode, “Home Is Where the Shart Is,” Dr. Devizo (Chris Pine) and his team of villains move into the Mansion as bona fide heroes after helping the League of Freedom save the world. The team struggles with their new roommates as Robobot (Zeb Wells) travels across the country in search of the elusive Swine Kampf (Chris Pine).

In season three of “SuperMansion,” the lunatics get the keys to the asylum when Dr. Devizo (Chris Pine) is declared a hero after “saving the world” at the end of last season. He and the Injustice Club are all made honorary members of the League of Freedom. The heroes and villains must learn to live and work together if they’re going to combat the never-ending amount of evil in the world.

Simultaneously, the network today kicked off a sweepstakes, in partnership with Xbox Live, for an opportunity for one lucky winner and their guest to win a trip to Los Angeles, CA. The prize also includes a behind-the-scenes tour and look at how the hit stop-motion animated series comes to life at the show’s production headquarters, Stoopid Buddies Studios, and more. Cranston announced the sweepstakes this morning on his twitter page. Fans can enter to win here through May 21 at 11:59 p.m. PT. Subject to Official Rules.

“SuperMansion” is created by Zeb Wells and Matthew Senreich, who also act as executive producers under their production company Stoopid Buddy Stoodios alongside Seth Green, John Harvatine IV and Eric Towner. Bryan Cranston and James Degus also serve as executive producers under their production banner Moon Shot Entertainment. The series is directed by Nick Simotas (“Back at the Barnyard”) and distributed by Sony Pictures Television Inc.