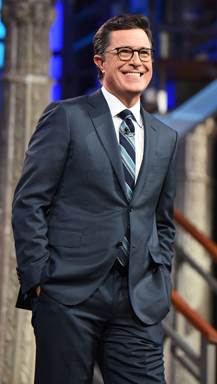 Multiple award-winner Stephen Colbert will host THE 39TH ANNUAL KENNEDY CENTER HONORS, to be broadcast Tuesday, Dec. 27 (9:00-11:00 PM, ET/PT) on the CBS Television Network. This will be Colbert’s third year hosting the special, having done so since 2014.

In a star-studded celebration on the Kennedy Center Opera House stage, Martha Argerich, Eagles, Al Pacino, Mavis Staples and James Taylor will be saluted by great performers from Hollywood and the arts capitals of the world. Seated with President and Mrs. Obama, the Honorees will accept the thanks of their peers and fans through performances and heartfelt tributes.

The President and Mrs. Obama will receive the Honorees, members of the Artists Committee who nominate them, and the Kennedy Center Board of Trustees at the White House prior to the gala performance taping on Dec. 4. The 2016 Kennedy Center Honors Gala concludes with a supper dance in the Grand Foyer.

The Honors recipients are recognized for their lifetime contributions to American culture through the performing arts – whether in dance, music, theater, opera, motion pictures or television – and are selected by the Center’s Board of Trustees. The primary criterion in the selection process is excellence. The Honors are not designated by art form or category of artistic achievement; over the years, the selection process has produced a balance among the various arts and artistic disciplines.

Stephen Colbert is the host, executive producer and writer of THE LATE SHOW with STEPHEN COLBERT, which launched in September 2015 on the Network.  Previously, he served as host, executive producer and writer of the long-running, multiple Emmy and Peabody Award-winning series “The Colbert Report” on Comedy Central. Colbert has written multiple New York Times bestsellers, including I AM AMERICA (And So Can You!) (2007) and AMERICA AGAIN: Re-Becoming The Greatness We Never Weren’t (2012).  He also won a Grammy Award in 2010 for his one-hour original musical holiday special, “A Colbert Christmas: The Greatest Gift of All!” Before hosting the show in 2014, Mr. Colbert appeared at the Kennedy Center Honors during a 2011 tribute to Yo-Yo Ma.

RATING: To Be Announced