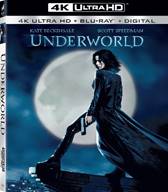 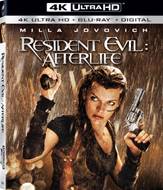 Underworld will debut in the format on December 27th, while Resident Evil will be released on January 17, 2017.

Follow the break for descriptions and lists of bounus features.

TORONTO, Ont. (November 21, 2016) – Just as new installments in two iconic film franchises are hitting theaters, earlier films in their series are getting a 4K Ultra HD with High Dynamic Range (HDR) upgrade when Sony Pictures Home Entertainment Canada debuts the original UNDERWORLD on December 27 and RESIDENT EVIL: AFTERLIFE on January 17.  Each 4K Ultra HD release will also include all the bonus materials from the earlier Blu-ray releases.

4K Ultra HD is the perfect way to experience these iconic action / horror films at 4K resolution in the home – both featuring four times the resolution of high definition, along with High Dynamic Range (HDR), which produces brilliant highlights, vibrant colours and greater contrast on compatible displays. Additionally, both films have been remixed specifically for the home theatre environment with Dolby Atmos® audio, delivering captivating sound that places and moves audio anywhere in the room, including overhead.

In the Underworld, Vampires are a secret clan of modern aristocratic sophisticates whose mortal enemies are the Lycans (werewolves), a shrewd gang of street thugs who prowl the city’s underbelly. No one knows the origin of their bitter blood feud, but the balance of power between them turns even bloodier when a beautiful young Vampire warrior and a newly-turned Lycan with a mysterious past fall in love. Kate Beckinsale and Scott Speedman star in this modern-day, action-packed tale of ruthless intrigue and forbidden passion ¬ all set against the dazzling backdrop of a timeless, Gothic metropolis.

Directed by Len Wiseman from a screenplay by Danny McBride and based on a story by Kevin Grevioux and Len Wiseman & Danny McBride, UNDERWORLD was produced by Gary Lucchesi, Tom Rosenberg and Richard Wright; and executive produced by Robert Bernacchi, Kevin Grevioux, Terry A. McKay, James McQuaide, Skip Williamson and Henry Winterstern. From Screen Gems and Lakeshore Entertainment.

UNDERWORLD has a run time of approximately 133 minutes and is rated 18A.

After a one-woman assault on the Umbrella Corporation’s fortress, Alice’s (Milla Jovovich) superhuman abilities are neutralized. Now, fleeing the Undead masses created by the T-virus, Alice reunites with Claire Redfield (Ali Larter) and her brother, Chris (Wentworth Miller). Together they take refuge with other survivors in an abandoned prison, where a savage zombie mob stands between them and the safety of “Arcadia.” Escaping these bloodthirsty mutants will take an arsenal.  But facing off with Albert Wesker and the Umbrella Corporation will take the fight for survival to a new level of danger.

RESIDENT EVIL: AFTERLIFE has a run time of approximately 97 minutes and is rated 18A.