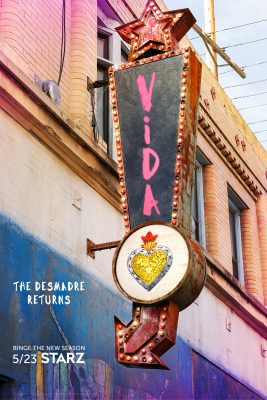 Starz has announced that season two of Vida will premiere on Thursday, May 23rd – and that the full second season will available to stream on all Starz platforms on that date.

All 10 Episodes of the Second Groundbreaking Season from Showrunner Tanya Saracho Will Be Made Available on the STARZ App, STARZ On-Demand and STARZPLAY

Santa Monica, Calif., March 25, 2019 – Starz, a Lionsgate company (NYSE: LGF.A, LGF.B), announced today that the second season of the trailblazing series “Vida” will premiere on Thursday, May 23, 2019. All 10 half-hour episodes will be made available on the STARZ app and STARZ On-Demand in the U.S. and Canada and on STARZPLAY in the U.K. and Germany.

In addition to its full season release on the STARZ app, STARZ On-Demand and STARZPLAY, “Vida” will air its linear premiere on STARZ on Sunday, May 26 at 8 p.m. ET/PT, airing each episode week-to-week.

“Certified Fresh” on Rotten Tomatoes with a perfect score of 100% and Audience Award–winner at the 2018 SXSW Film Festival, “Vida” is created and executive produced by Tanya Saracho; Big Beach TV’s Robin Schwartz, Peter Saraf and Marc Turtletaub; and Stephanie Langhoff (“Togetherness,” The Bronze, The Skeleton Twins). In addition, “Vida” Season Two will make its world premiere as an Official Selection of the 2019 Tribeca Film Festival.

In the second season of “Vida,” Lyn and Emma begin the monumental task of rebuilding their mother’s business while navigating financial constraints, competing developers, and the growing anti-gentrification movement. Lyn and Emma must contemplate the relationships in their lives, including their own, and are forced to dig deep to unearth what their mother’s legacy means to them.

Hispanic-household viewing of “Vida” has nearly tripled since its premiere on Sunday, May 6, 2018, growing by 171% to earn the series the largest Hispanic audience composition for premium series in 2018.* Additionally, on the STARZ app, the series audience grew by more than 60% from the season premiere to the finale.**

Production on the second season wrapped November 2018 in Los Angeles.