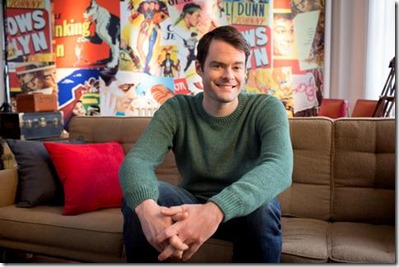 Bill Hader may be best known for his work on Saturday Night Live and voice work in projects ranging from the very adult The Venture Brothers to the family friendly Cloudy with a Chance of Meatballs, but he’s also quietly earned a reputation as something of an expert in family films as the host of TCM’s TCM Essentials Jr. – which runs films that are perfect for parents to introduce to their kids.

Hader returns to host a third season of TCM Essentials Jr. beginning with a screening of the classic Danny Kaye action-comedy The Court Jester on June 2nd (8/7C). Check out the official press release – and a complete listing of films to be screened – following the jump.

SNL‘s Bill Hader Returns with A New Lineup of Films

This year marks Hader’s fourth outing with TCM. He served as host of TCM Essentials Jr. for the past two years, presenting 13 films throughout the summer. Prior to that, he appeared on TCM as a Guest Programmer. In addition to hosting TCM Essentials Jr., Hader will be among the special guests at the 2013 TCM Classic Film Festival in Hollywood, where he’ll be hosting a screening of the hilarious Ealing Studios comedy The Ladykillers (1955).

Hader has been a fixture on Saturday Night Live for the past seven years, recently earning an Emmy® nomination for his work. He also serves as a producer on South Park. Hader’s films include Tropic Thunder, Night at the Museum 2, Superbad and Forgetting Sarah Marshall. In July, he will be heard in the animated feature Turbo, with Ryan Reynolds and Maya Rudolph.

TCM Essentials Jr. runs Sunday evenings throughout the summer. In addition to The Court Jester, Hader will host June presentations of The Lavender Hill Mob (1951) the droll Ealing comedy starring Alec Guinness; To Kill A Mockingbird (1962), the family classic starring Gregory Peck; The Pirate (1948), a tale of romance and adventure starring the legendary Judy Garland and Gene Kelly; and A Tree Grows in Brooklyn (1945), starring Dorothy McGuire in which Peggy Ann Garner, a bright and imaginative character, grows up in Brooklyn with her idealistic father.

In August, the 2013 showcase will wrap up with the comedy Ruggles of Red Gap (1935); the John Steinbeck drama The Grapes of Wrath (1940), starring Henry Fonda and directed by John Ford; The Great Race (1965), the high-speed comedy starring Tony Curtis and Natalie Wood; and Frank Capra’s romantic comedy It Happened One Night (1934), starring Clark Gable and Claudette Colbert.

The following is the complete summer 2013 schedule of TCM Essentials Jr., hosted by Bill Hader. Each Sunday’s installment will begin at 8 p.m. (ET).